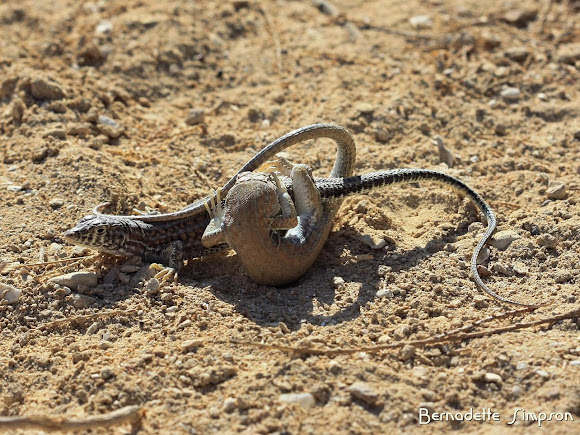 "During courtship the male approaches the female with a bent neck, and then runs in semi-circles, whilst probing the female’s body with its tongue. If receptive, the female lies flat and lifts the base of the tail, allowing the male to make cloacal contact. The eggs are laid about two weeks after mating in a deep hole in moist ground, which is subsequently covered up. The eggs, which normally number from around two to seven in a clutch, remain buried for 89 to 100 days before hatching. ~Arkive

"Occurs in arid regions, on open sand or clay ground, with vegetation or rocks for cover." ~Arkive

I noticed these lizards when I was packing up my tent in the early morning. They were less then 2 meters away and were doing quite a shuffle/run around, that lasted long enough for me to get my camera out and switch lenses. I thought for sure I'd scare them away, but they stayed in the same spot and didn't seem bothered by my presence. The first two photos were right after they stopped moving around and they then stayed in the position shown in the last photos for quite awhile - I took plenty of photos, packed up my tent and they were still there.

Thanks, Maria, Mark, and Leuba! LOL - I said the same thing to my husband - that the male looked quite smug. ;-)

Thank you, Fyn, for letting me know! Always an honor to be nominated. :-)

Wonderful ! "Packing your tent" adds a great deal to this spotting. Keep safe.

Great series, Bernadette. And the male looks "satisfied" in photos 3 and 4! :)

Thanks, dororeinecke! I think it was Mother Nature making up for the lack of flowers to photograph. ;-)

You were so lucky!
And WE are so lucky, that you could make pictures and post them here! :)