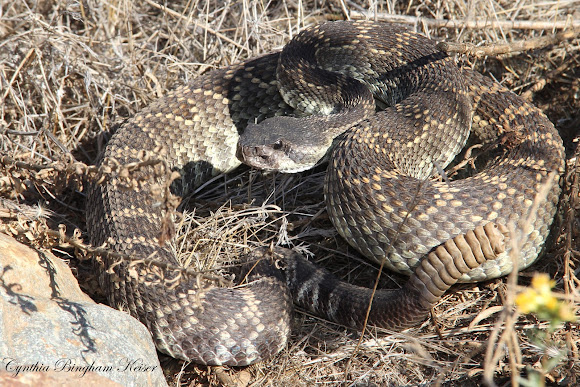 This adult snake was about 4 feet long with dark diamond pattern down the top of the body. There's a dark line starting at the eye that extends across the "cheek". The video shows it coiled and you can hear the loud rattle. This species is responsible for the most human bite records in the US.

It was stretched out and wound in between rocks when I first walked up on it. It very quickly shot out of the rocks, coiled and started its loud rattle. The snake and rock pile was along a dirt trail near Lake Hodges.

The juvenile can be seen at my other spotting: http://www.projectnoah.org/spottings/756... "Most species of rattlesnakes have hemotoxic venom, destroying tissue, causing necrosis and coagulopathy (disrupted blood clotting). Rattlesnake bites are the leading cause of snakebite injuries in North America, and cause approximately 82% of fatalities. rattlesnakes have two organs that can sense radiation: their eyes, and a set of heat-sensing "pits" on their face that enable them to locate prey and strike towards it, based on the prey's thermal radiation signature." When threatened, they contract special "shaker" muscles in the tail causing the chamber segments to vibrate against one another, making the rattling noise (which is amplified because the segments are hollow). - Wikipedia

That's so wonderful! There are many here in the community that will agree 100% I'm not sure if you've read the blogs but there are several from snake week (links to all on bottom): http://blog.projectnoah.org/post/3212133.... They're good reads!

I enjoy teaching others who are afraid or misunderstand certain snakes such as the Cottonmouth. I meet many people that claim those are aggressive when I have yet to come upon an aggressive Cottonmouth out of the 100s that I have handled. The ones I have handled have been very mild tempered. I wish more people understood snakes.

I think it is too. It's so nice to be a part of a community where the majority like snakes!

Thank you for the comments, Lauren, Bryan and Karen! This snake was quite impressive! Karen, definitely good to know there's a center nearby and I'm trying really hard not to visit someday :)

Wow! Awesome photos. There is a top notch snake bite treatment center at Loma Linda. Hopefully, you will never have to use it. Interesting stats from Karen L . Good stuff!

Beautiful snake! They're such variable animals.

He must have been kind of old to have a rattle that big. Scary.

Hi Lauren, it was its rattle. I wasn't going to get closer for better sound :)

Great pictures of a scary fellow. Was the noise in the video his rattle or some crickets?

That's excellent information, Karen! Thank you for commenting. This beauty coiled up when I stopped walking past it at a safe distance. It apparently took that as a threat and warned me to keep moving on. It was quite effective!

Great shots Cindy!
Just to clarify the info - although 82% of all fatalities from snake bites in the US do come from rattlesnakes, around 80% involve men between the ages of 16 & 25 - & alcohol is usually a factor. Although potentially deadly, rattlesnakes are not typically aggressive unless messed with.

Thank you Kenneth! It was a beauty.

Love C. helleri. Awesome find/shots. One of my top snakes on my list to find.

LOL. Yes, I backed up! I was amazed how my heartbeat shot up. I had no idea they were that FAST. The speed, coil and rattle are amazingly effective! Thank you Ava :)

And you immediately started to walk backwards away from it, right!? GREAT series!