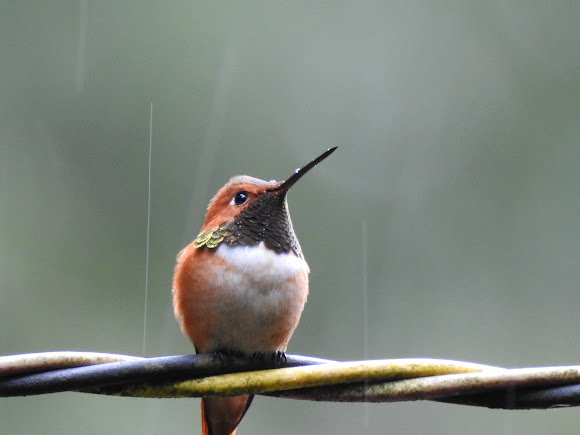 A section of the south coast of Oregon and north coast of oregon(from Arcata Ca, humboldt cnty to Florence Or in Lane county, with del norte, curry, coos and douglas counties in between) is home to hybridized Selasphorus hummingbirds. In a study being done by sdsu and ucr, the mating behavior of these birds coupled with the notch in the tail feather responsible for the whistle made on descent of the mating flight are being analyzed. In addition dna will be tested in future studies to determine the exact boundaries of the hybrid zone, which is assumed to continue east about 50 miles. The rufous has a J shaped mating flight and the allens creates a pendulum shaped flight. In the hybrid zone, the flights often do not match the male birds performing them. Previously green backed rufous were considered a variation and now ornithologists are beginning to believe they are part of this hybrid phenomenon

Coquille Oregon - in a clearing at the edge of a forest

The first Northward migrants arrive in the 2nd week of February and the last southbound individuals pass through around the end of October. Courtship displays begin in March or April and continue through the entire breeding season into June. With a dozen feeders up, we see a large population. This was the first male of the season for 2018. Several weeks after this photo was taken, we watched an adult male "S. rufus" leave the feeder and begin an S sassin courtship display http://www.sandiegofieldornithologists.o... https://kevinburnslab.com/2017/07/23/new...

Check out the area between Del Norte Cnty Ca and lane. I know hotspots (besides my place) include Gold beach, Ophir, Port Orford, Bandon and up through Coos Bay Nb

Super interesting spotting, Karen. I love hummers, and hope to spot and photo a few of these some day.

Thank you, Daniele and Neil: I keep thinking of more info to add to this one(just edited). I've been feeding these guys at this location for close to 25 years and only this year learned about the study. It was actually spurred by local birders using EBird and Oregon Birds on line commenting on adult male birds with displays that didn't match their phenotype.

Excellent spotting, Karen. This little one is gorgeous. Awesome photos and notes.

Thank you, Ava. We were fortunate enough to attend a talk by the primary researcher on the project.

Beautiful photos with the long rain drops, and interesting information!