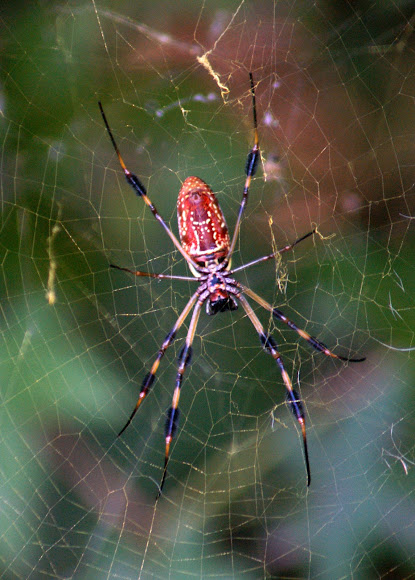 Spider where the female (pictured here) has a long cylindrical body, up to about 50mm or 2" by the end of the season, yellow to brownish-orange abdomen with silvery spots and silvery cephalothorax. Three of its four pairs of legs have hairy black patches above the joints. The male is much smaller (5-8 mm)

Range is Predominantly southeastern US. Florida, Gulf States, north to North Carolina, south to Central and South America as far as Argentina. The female builds a large orbweb which can span several feet, most often seen (or walked into by unsuspecting hikers) 2 to 8 feet from the ground, but can be much higher (at least one has been known to spin her web at the top corner of a structure 65 feet from the ground, they are also reported to spin at the top of utility poles). Beside the main web may be one or more barrier webs which protect her from predators. One or more small males may be found sitting in the female's web. The web is a semipermanent structure which is repaired as necessary, not entirely destroyed and rebuilt daily, as is the case with some other orbweavers. This one was photographed at Phinizy Swamp Nature Park in Augusta (Richmond County), GA.

Small flying insects - flies, beetles, moths etc. - are caught in the web. The spider incapacitates them by biting. Wrapped prey is brought back to the hub of the web, which is usually off-center in the structure. Like other spiders, this one will bite in self-defense, especially if you go out of your way to provoke it (in particular, by handling or picking it up). Spiders have venom which enables them to incapacitate their prey. However, the bite of most species is described as much less severe than a bee sting.