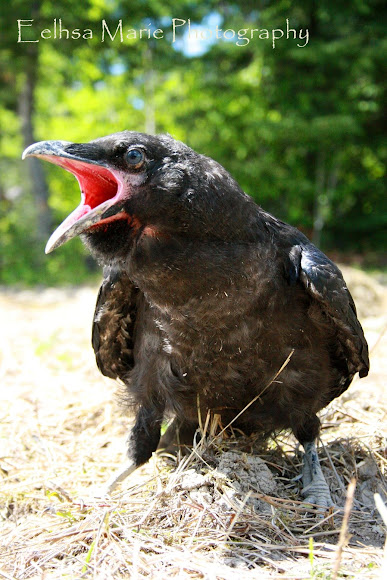 The Common Raven (also known as the Northern Raven) is one of the largest in the corvid family and the one with the largest range (found across the Northern Hemisphere). A mature Common Raven measures around 63 centimeters (25 inches) in length and weighs 1.2 kilograms (2.6 pounds). The Common Raven has a long lifespan, living up to 21 years in the wild. They mate for life and each pair will defend a territory. These highly intelligent and adaptable birds have learned to coexist with humans and have done so for many many years. Ravens are omnivores and will eat anything from carrion to grains, berries, fruit and even garbage. Ravens are often confused with crows though they are significantly larger and have a much larger bill. Ravens also have longer feathers on their throats and above their beaks and much deeper and more varied vocal sounds. (15 to 30 different categories of vocalization have been specified, with calls including: alarm calls, chase calls and fight calls). This highly social bird can also mimic sounds heard in its environment and even human speech. Ravens have very large brains and display advanced skills in problem solving. Ravens are very playful and have been observed sliding down snow covered roofs in winter or even rolling down a snowy hill. They also sometimes drop and catch sticks in midair and seem to enjoy acrobatic flips and dives while flying. Ravens breed and nest early (between February and April depending on the coldness of their environment). The female lays between 3 and 7 eggs which are incubated for 18 to 21 days. The young fledge at 35 to 42 days and are fed by both parents, staying with them for another six months after leaving the nest.

The large range of the Common Raven means it can be found in many varied climates and habitats. It lives in dessert climates as well as cold, northern climates. Wherever a raven lives in usually stays there year round (except in Arctic regions). The preferred habitat of the Common Raven is woodlands with large open fields nearby. They also like coastal regions for nesting and feeding due to the ready supply of water and more stable temperatures.

I first spotted this young raven on June 4th. He (or she) was completely unafraid of the atv, my dog or me. At first I believed this lack of fear could possibly be due to the fact that the raven had recently fledged and was perhaps hungry enough that his natural fear was overcome by the desire to be fed. (He was displaying begging behaviour, flapping his wings and opening his beak wide and calling. Continued observation over the last several days has caused me to be quite concerned, however. This young bird is completely unafraid of anything, including my dad's tractor and machinery. He will hop up to anyone or anything while calling loudly. (He actually bit machinery while my dad was working the field.) And while I had at first thought this might be due to hunger, he shows little to no interest in finding food for himself or eating things I have left out. He also makes no attempt to fly or perch off the ground, but remains exposed in the field even in a heavy rain. In other ways he seems healthy enough. He is not listless and his hearing, eyesight and balance seem fine. He has energy and is alert, watching the sky and observing his surroundings. I have also seen his parents and siblings around, so I know his parents have not abandoned him yet. He is significantly smaller and shabbier looking than his siblings, and does not stay with them. (They are both flying and moving around, he is not). I have contacted various wildlife rehabilitation centres, but so far the consensus is that he may be unable to learn essential survival skills, perhaps due to an injury or being born with these inabilities. One of my main concerns in regards to his almost aggressive behaviour and lack of fear is that he has an illness that may be communicable to other animals or even people, but so far there seems to be no real cause for concern in that regard. It seems most likely this he has some sort of neurological problem. I'm hoping he can somehow adapt and mature despite this. Ravens are one of the most intelligent birds, and despite the fact that many people see them as nothing more than big, noisy pests, I find them very fascinating.

Thanks for your excellent observations and notes.