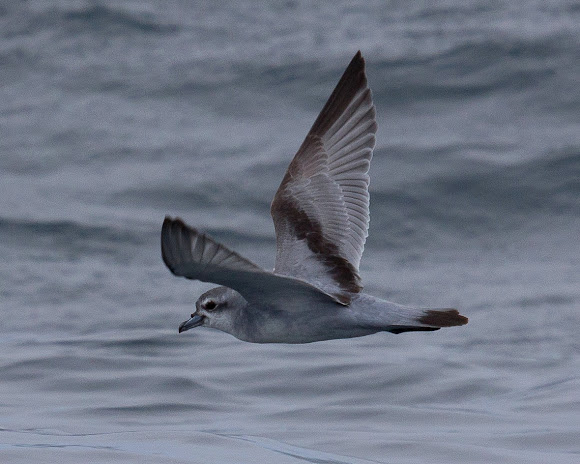 Small prion (23-28 cm, wing span 56-60 cm). Blueish/grey upper parts, a broad black tail tip and black 'M' across upper wings and back. Head is generally pale with a white supercilium and weak black eye stripe. Bill is blue and generally quite fine with a defined hook.

Widespread in temperate and sub-Antarctic southern oceans. In NZ breeds on various pest free offshore islands and on rat free cliff ledges in Dunedin on the South Island.

These birds photographed in the Hauraki Gulf in northern New Zealand.

Thank you Polilla. I really appreciate the comments. This bunch of sea birds seem much overlooked, they are generally not brightly coloured and, as you point out, not all that easy to go and observe. Considering their size (tiny storm petrels to massive albatross) and their environment, they are incredible birds and many are so under threat from world fisheries, pollution etc. Its my pleasure to share what knowledge I have of them.