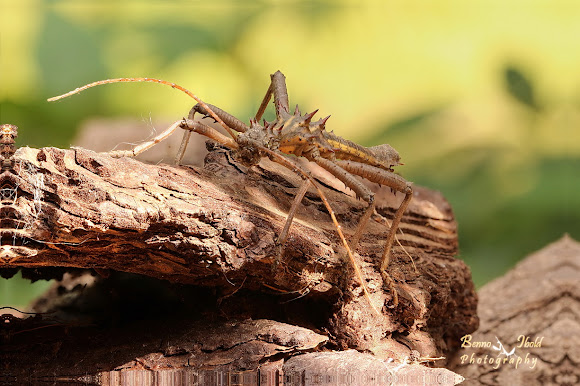 The Borneo thorn stick insect is one of the smaller members of stick insects. The males are only about 35 to 43 millimeters long, the females reach a length of about 45 to 48 millimeters and have shorter spines than the males. The wingless animals in both sexes wear on your head and on the front edge of Mesonotums one pair spines and at the rear edge of the meso and metathorax each a ring of four spines. On the entire abdomen of males is only one pair spines, which can be found on the second abdominal segment. The females have besides this on the third abdominal segment a couple sting, which is supplemented by smaller, mostly lateral spines. From Borneo thorn cricket two color forms are known. Both females are dark brown monochrome up to a bright central reservation. The abdomen of egg-laying females is thickened spherically in the middle. The males of both color forms show on the back from the rear of the Mesothorax to abdome dark areas. Other spots are located on the pronotum and between the side and dorsal spines of meso and metathorax, the spines are even brightly colored. On the abdomen, the dark areas flow together to form two parallel longitudinal strips. While the stains remain very small in the red, which can be regarded as a normal form color variant, they coalesce significantly large area and can in the green form. Their color is brown to dark green in the red shape in the green form these areas are of clear metallic green. The basic color of red normal form varies from light brown on the legs up to a glowing red in particular on the head, chest and the upper side of the abdomen. In the green form the areas between the green spots are rather plain colored light brown.

As their common name suggests, the Borneo thorn cricket comes from the island of Borneo. There it is especially in the northwest, more often to be found in the Malayan state of Sarawak and reaches here the highest observed population density of living on Borneo Gespenstschrecken. The green mold was previously only found on Mount Serapi. The animals live in low shrub vegetation of the rain forests.