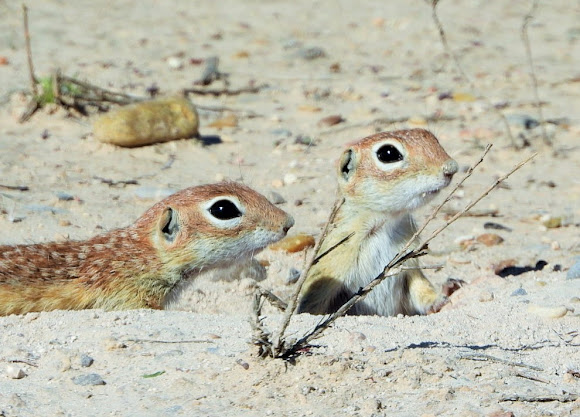 The Spotted ground squirrel is one of the smallest squirrels in North America. They create tunnels to store its food, as well as shelter and hibernation quarters. Large black eyes with a white eye ring, white underbelly, brown back with white spots.

Fabulous series Brian. I imagine they would be entertaining to watch.

Thanks for commenting Sukanya and Tukup. New for me as well Tukup.

Wow, that's a new ground squirrel for me. Nice series Brian. Thanks.

Thank you ornithoptera80 and Jae.

Thank you Daniele. Their small ears are Interesting as well. They look to be lobbed on top. Wikipedia says they have 7 different alert postures. Not sure if any of these pics shows any. I find postures and gestures in animals so fascinating.

Their eyes take half of their faces! Hard to resist ;-) Great series as always Brian.

Thanks so much Greg. I had so much fun at this wildlife refuge. I was only there for 4 hours and was lucky to get pictures of the ground squirrels before they went down in their holes.

Brilliant spotting all the captures are amazing Brian.