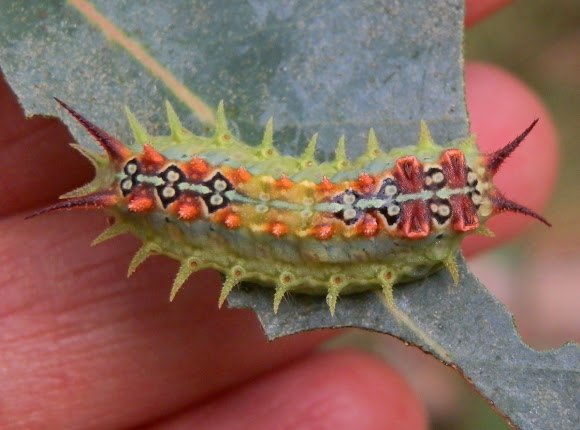 This attractive larva was about 25 mm long. A pale lime-green underside was topped with a pale aqua-green body. On either side of the midline were small raised knobs with colours ranging from red to pale yellow. The red knobs nearer the head had long retractable spikes (pic 4). A white line marked the midline of the dorsal side and on either side were paired black and white markings. A pair of horns were seen at either end. Pic 4 shows wriggly markings/ tracts left by the larva.

Spotted on a young Eucalytpus tree

A very exciting find ! There were several of these larvae on this young tree. I am hoping to see the adult around these parts, in a few months. These larvae feed on several species of Eucalyptus, some wattle and species of Mangrove. Family: Limacodidae Subfamily: Zygaenoidea

This one must like me, Martin. I got stung by the D.vulnerans catty (on the other tree at Wicks) when I accidently brushed against trying to photograph a fly on the same gum tree.
The painted cup moth catty is quite dramatic. I hope we can time our visit to central Vic to see one of those..

This one hardly shows its defensive spines does it. I recently saw both of our two species at Wicks Reserve, each on their own different trees. A third one we don't seem to find in Melbourne is reported to have recently created an infestation in central Victoria http://www.projectnoah.org/spottings/380...