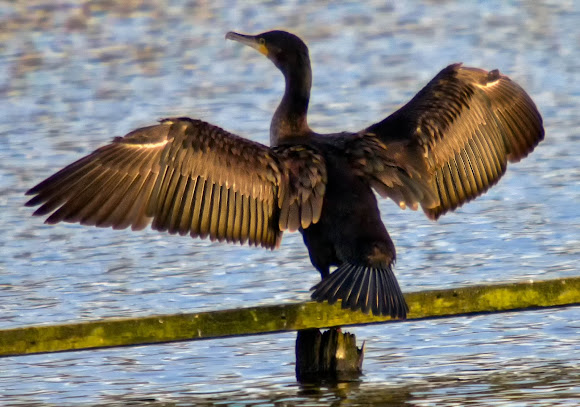 A large and conspicuous waterbird, the cormorant has an almost primitive appearance with its long neck making it appear almost reptilian. It is often seen standing with its wings held out to dry. Regarded by some as black, sinister and greedy, cormorants are supreme fishers which can bring them into conflict with anglers and they have been persecuted in the past. The UK holds internationally important wintering numbers.

Found around the UK coastline on rocky shores, coastal lagoons and estuaries, it is increasingly being seen inland at reservoirs, lakes and gravel pits.

Cormorants are often seen perching on a rock or jetty with their wings outstretched. It is often assumed that a bird in this posture is drying its wings because they are not well waterproofed. However, this would be surprising in a bird which spends so much time in the water and it can be seen holding its wings open in the pouring rain! A more likely explanation for this habit is that it keeps a group of birds spaced out. When a bird lands, it extends its wings so that the birds nearby shift away; when it folds its wings the line of birds is well-spaced with a wingspan between each one. Being spaced out is also an advantage when taking off in a hurry.