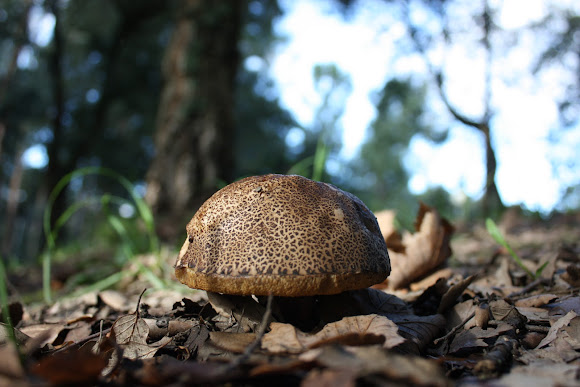 Boletus chrysenteron (synonymous with Xerocomus chrysenteron) is a small, edible, wild mushroom in the Boletaceae family. These mushrooms have tubes and pores instead of gills beneath their caps. It is commonly known as the Red Cracking Bolete. Young specimens of B. chrysenteron often have a dark, dry surface, and tomentose caps which might easily be mistaken for Bay Boletes B. badius. When fully expanded, caps are 4 to 10 cm in diameter with very little substance and thin flesh that turns a blue color when slightly cut or bruised.[2] Caps mature to convex and plane in old age.[3] Cracks in the mature cap reveal a thin layer of red flesh below the skin.[2] The 10 to 15 mm diameter stems have no ring, are bright yellow and the lower part is covered in coral-red fibrils and has a constant elliptical to fusiform diameter throughout its length of 4 to 8 cm tall.[3] The cream-colored stem flesh turns blue when cut. B. chrysenteron has large, yellow, angular pores,[4] and produces an olive brown spore print.

B. chrysenteron grows solitary or in small groups in hardwood/conifer woods from early fall to mid-winter. It is mycorrhizal with hardwood trees, often beech on well drained soils. It is frequent in parts of the northern temperate zones.[4] This species may not be as common as once thought, having been often mistaken for the recently recognised B.cisalpinus Simonini, Ladurner & Peintner

spotted in a mix forest of oaks,pine trees and eucalyphtus,near my house. I have it id in my list,i'll check it latter