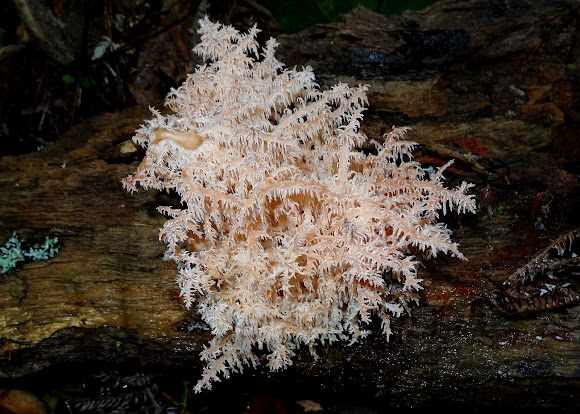 Also known as Coral Tooth Fungus. This is a large bodied white to pinkish white fungus. It grows from a relatively small stem base that is many branched. Small spines (about 1cm long) hang along multiple branches. It can be found growing alone or in clumps, sometimes these clumps can be quite large. Flesh discolours and hardens with age.

This one found in mixed native forest in Pirongia Forest Park in the North Island of New Zealand. This fungus is a saprophyte usually found on standing dead broadleaf. I found this attached to dead wood but on the ground. Am thinking it may be part of a windfall event.

There are several similar species but this one occurs in NZ and Australia. It is not a true coral fungus but rather a toothed fungus. Names can be confusing and it has been known as H. ramosum and also associated as H. americanum.

Thank you for the comment Machi. You may well be right as it is hard to believe it fell and stayed in one piece. I have looked for years for one of these and never seen one so close up before. Either way it was magnificent.

It looks like it is on an old log, so it is possible for it to have been growing directly from there and did not fall. These often grow on fallen branches.

Thank you for your comments Mark and Flowntheloop. I agree Mark, I have never heard of this species growing on the ground so my only conclusion is that it did fall. Amazing it was still in one piece!

Hericium has always been one of my favorite genera! <3 Just gorgeous!

Nice find Rob. Lucky it's still in shape if it fell.