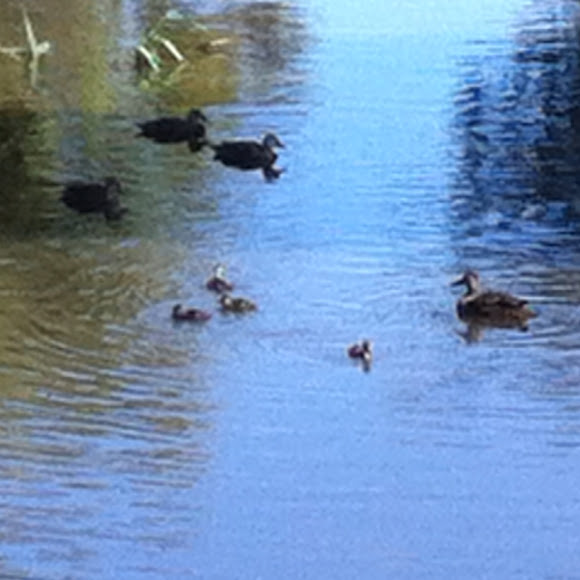 The Pacific Black Duck is mostly mid-brown in colour, with each feather edged buff. The head pattern is characteristic, with a dark brown line through the eye, bordered with cream above and below and a dark brown crown. The upper wing colour is the same as the back, with a bright glossy green patch in the secondary flight feathers. The white underwing is conspicuous in flight. Young Pacific Black Ducks are similar to the adults in plumage. The size range is 54–61 cm; males tend to be larger than females, and some island forms are smaller and darker than the main populations. It is not resident on the Marianas islands, but sometimes occurs there during migration. The now extinct Mariana Mallard was probably originally derived from hybrids between this species and the mallard, which came to the islands during migration and settled down there.

Observed at the Old Port Reach Reserve (Grange, Adelaide, South Australia) not far from Charles Sturt's Cottage. This is generally a slow moving water way with patches of reeds here and there, very close to Grange Primary School and busy Jetty St situated in suburban Adelaide. The Pacific Black Duck is one of the most versatile of the Australian ducks. It frequents all types of water, from isolated forest pools to tidal mudflats. Pacific Black Ducks are usually seen in pairs or small flocks and readily mix with other ducks. In the wild, birds are often very wary of humans and seldom allow close approach. Birds in urban ponds become quite tame, however. This sociable duck is found in a variety of wetland habitats, and its nesting habits are much like those of the Mallard, which is encroaching on its range in New Zealand. It feeds by upending, like other Anas ducks

Mother duck and duckling right of picture. The Pacific Black Duck (Anas superciliosa) is a dabbling duck found in much of Indonesia, New Guinea, Australia, New Zealand, and many islands in the southwestern Pacific, reaching to the Caroline Islands in the north and French Polynesia in the east. It is usually called the Grey Duck in New Zealand, where it is also known by its Maori name, Pārera.