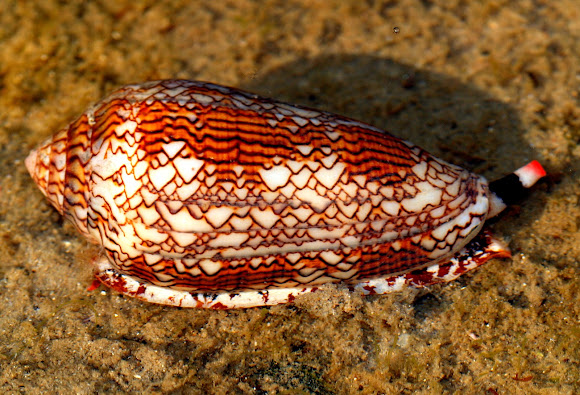 The textile cone shell, sometimes simply known as "cones", (family Conidae), belongs to the taxonomic family of medium-sized to large, sophisticated predatory marine gastropod molluscs. The shell is shaped roughly like an ice-cream cone. The narrow end of the cone shell is the anterior end, and the wide end shows the usually very low spire of the gastropod shell. The larger species can grow up to 23 cm in length.

There are about 500 different species of cone shells world wide and several of the most venomous live in Australia. Whilst typically found in warm and tropical seas some species are adapted to temperate environments. At rocky shores and temperate reefs they hide and hunt under rocks in the lower intertidal and shallow subtidal zones.

The textile cone are carnivorous, and predatory. They hunt and eat prey such as marine worms, small fish, and other molluscs, The prey is immobilized using a modified radular tooth along with a poison gland containing neurotoxins; launched out of its mouth in a harpoon-like action. The textile cone should not be handled as it is capable of injecting venom into humans with the possibility it could be fatal.

Thanks Argy, me being from Far North Queensland, I didn;t realise they were this far south. Love the pattern on them/

Wow - so pretty but so dangerous. Being a boaty these things (and Irukandji) bother me more than anything on land.