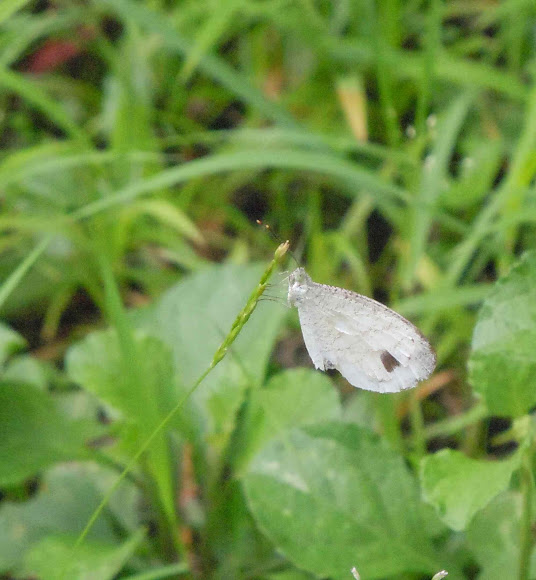 The Psyche (Leptosia nina) is a small butterfly of the family Pieridae (the Sulphurs, Yellows and whites) and is found in Southeast Asia and the Indian subcontinent. The upper forewing has a black spot on a mainly white background. The flight is weak and erratic and the body of the butterfly bobs up and down as it beats its wings. They fly low over the grass and the butterfly rarely leaves the ground level. Upperside: white; base of wings very slightly powdered with minute black scales. Forewing: costa speckled obscurely with black; apex black, the inner margin of this inwardly angulate; a very large somewhat pear-shaped post-discal spot also black. Hindwing white, uniform; in most specimens an obscure, extremely slender, terminal black line. Underside: white, coastal margin and apex of forewing broadly, and the whole surface of the hindwing irrorated with transverse, very slender, greenish strigae and minute dots; these on the hindwing have a tendency to form subbasal, medial and discal obliquely transverse obscure bands; forewing: the postdiscal black spot as on the upperside; terminal margins of both fore and hind wings with minute black, short, transverse slender lines at the apices of the veins, that have a tendency to coalesce and form a terminal continuous line as on the upperside. Antennae dark brown spotted with white, head slightly brownish, thorax and abdomen white. Female: similar, the black markings on the upperside of the forewing on the whole slightly broader, but not invariably so. Wingspan: 25–53 mm

The lower ranges of the Himalayas from Mussoorie to Sikkim; Central, Western and Southern India, but not in the desert-tracts; Ceylon; Assam; Burma and Tenasserim; extending to China and the Malayan region

Larva: Green with a pale glaucous tinge about the bases of the legs and slightly hairy. Feeds on capers. Capparis zeylanica has been noted as a food plant. Pupa: Sometimes green, but oftener of a delicate pink shade. Both the larva and pupa are very like those Terias hecabe, but more delicately formed. (Davidson, Bell and Aitken quoted in Bingham)

thanks Nuwan for the correct ID