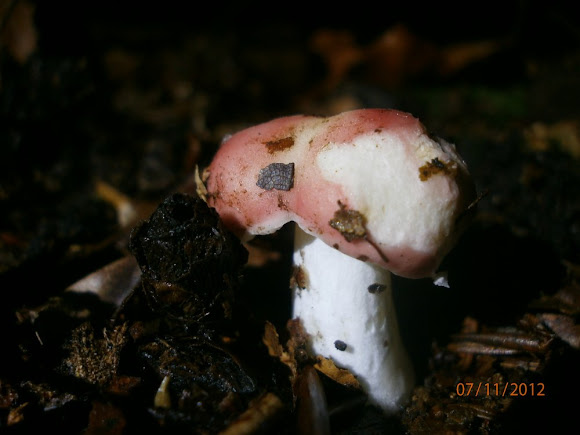 Very spicy, small Russula. Maybe 2.5cm across. Similar to this spotting: http://www.projectnoah.org/spottings/155... . Russula betularum, Russula gracillima and Russula fragilis can all be very similar. According to Wikipedia 'the cuticle of [R. fragilis] is only three quarters peeling, usually darker at the centre, and with purplish tones. It [R. fragilis] also has marked serrations on the gill edges.' http://en.wikipedia.org/wiki/Russula_bet... . According to Wikipedia '[R. betularum,] although usually paler can be mistaken for washed out specimens of R. fragilis'. According to Wikipedia 'Russula gracillima is similar in appearance, and grows in the same locations [as R. betularum], although neither species [R. betularum nor R. gracillima] have nicks (serrations) on the gill edges.'. On NBN Gateway R. betularum seems common http://data.nbn.org.uk/interactive/map.j..., R. gracillima seems occasional http://data.nbn.org.uk/interactive/map.j..., R fragilis seems uncommon http://data.nbn.org.uk/interactive/map.j... . For now I guess R. betularum since it's more consistently this pale pink colour, it seems the most common, and I can't see serrated gills (although the photo is bad).