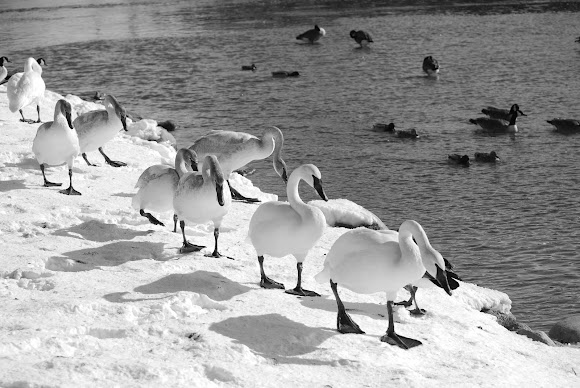 March of the Trumpeter Swans (1st image) shows adults and juveniles marching in a line with the parents or adults in the lead, heading back toward an area favored for entering and exiting the river. The 2nd image "Capulets and Montagues" brings to mind the star-crossed lovers families marching against each other. In fact, I'm not sure what they were doing but they appeared to be making some kind of stand or show against or towards another group of Swans. The 3rd image shows a small group of what I believe to be young male Trumpeter Swans showing off or competing for available females (flexing their proverbial muscles). The 4th and 5th image show a possible pairing of a male and a female. Romance and thus, Romeo and Juliet come to mind. These images of Trumpeter Swans were taken during a time of year when they "pair up" and put on unusual or interesting displays. Think Valentine's Day when love is in the air, about 1-2 weeks prior to and following February 14th but this may be something more to do with temperatures and conditions than actual calendar dates. This particular year the water levels were high or normal but the temperatures were very cold so many lakes froze up or froze to a degree that large gatherings were only found on the faster flowing river.

Here in Minnesota Trumpeter Swans can be found in Monticello and along the Otter Tail River in north-western Minnesota, provided the river stays open and doesn't freeze over completely, from late November through mid March. Last summer I found various groups of individuals and families with young in Frazee, Minnesota and a few stayed on the river and in lakes in Otter Tail County but the majority left or migrated further north into Canada (I believe). These particular Trumpeter Swans were photographed on the Otter Tail River in Fergus Falls, Minnesota.

The Trumpeter Swans I observed primarily ate what they found in the water (green vegetation: shoots or reeds, it appeared) however, many were observed eating in farm fields alongside Canadian Geese and Mallards, where farmers had grown and harvested corn crops the previous summer. Young (what I assumed to be, based on larger size and aggression levels) males seemed to compete with each other for the unattached female's attention. The males (again, assumed based on size and behavior) would sometimes gather together in groups of 2-6 sticking out their enlarged chests (?) and spreading their wings out, as if on display or "strutting" for the females. Occasionally a brawl would happen where one or more would chase off another competitor (?) biting with their beaks at wings, necks and tail feathers. I've observed similar behavior in Canadian Geese but I'm not sure if it was an outsider, challenger or simply something it did to upset or irritate the others. I pushed the camera, the battery and my body to the max this year but I think it was worth it. In three or four months I learned more about Trumpeter Swans than I had from half a dozen books or articles about them. Coming from the Twin Cities, where I'd never seen a Trumpeter Swan in the wild, they fascinated me. The more time I spent with them, the more they peeked my curiosity. At first I just wanted to get closer to them, capture them in better lighting, etc...In the end I had to know why they did certain things and what their body language was saying...Maybe I read more into it than it was but, eventually they got used to me and accepted me sitting on the ground amongst them. I think that's when you get the most natural images and when you catch the unique or intriguing images as well.

High of 19 degrees Fahrenheit and a low of 0 degrees on this particular day if that helps anyone here.

KarenPuracan-Thank you so much! We've had a pretty serious drought up here so, the water levels are lower than normal. This means waters that usually stay open or partially open may freeze up completely this winter. I'm waiting to see if they stick around. I'd just found a flock of 40-50 Trumpeter Swans on an area of open water but a pair of duck hunters turn up the next day and I'm afraid their gun fire frightened them all away. I'm hoping and praying they'll come back and that this area of water will stay open to support them through the winter. Every year is different as far as where they are, how many you'll find or how long they'll stay. In the past the Otter Tail River has supported many Trumpeter Swan families and individuals from Fergus Falls to Underwood and Otter Tail Lake. Typically they arrive in late November and leave again mid March. This year is a gamble but I found a few this past summer up in Frazee, Minnesota as well and with their very young Cygnets in tow. :-) I've talked to other photographers who say the Swans are numerous in Monticello, Minnesota right now so...all you have to do is make the journey, dress warm and plan on having a wonderful adventure. I hope you're able to fulfill your wish of coming to see them. :-)))

Small Wonders-I hadn't heard there was such a problem. A Monticello woman (now deceased) is credited for having helped bring back their numbers here in Minnesota. Last year I spent the winter developing a relationship with a Swan family closer to home. Every day I'd go to visit them and bring a few buckets of whole kernel corn. When I arrived I'd say, "Hello!" and would repeat it when the family would eventually swim toward the river bank for their treats. A few weeks before they migrated and left the area, the male (larger of the two adults and first one to come ashore to eat) started mimicking my greeting, "Ee-Oh!". Their young must have thought it funny or amazing as they'd all start up honking whenever Dad talked human. :-)

So nice to see these swans thriving. Too many Mute swans destroying the Trumpeter swan habitat in our area.
Great series!

Magnificent! They are on my "must see before I die" list. I'm slightly jealous... LOL