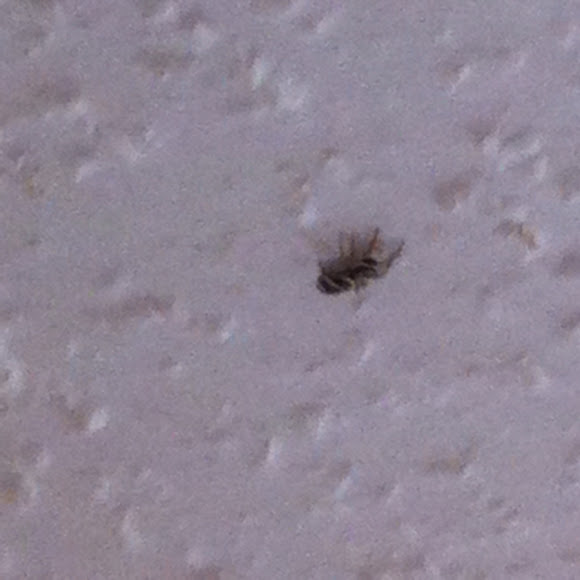 The zebra spider (Salticus scenicus) is a common jumping spider of the Northern Hemisphere. Like other jumping spiders, it doesn't build a web. It uses its four pairs of large eyes to locate prey and its jumping ability to pounce and capture it. Zebra spiders are often noted for their awareness of humans. Upon noticing someone observing them, they can be seen raising their head, and usually change behavior (hence the name Salticus scenicus, theatrical jumper). Female zebra spiders are 5–9 millimetres (0.20–0.35 in) long and males are 5–6 mm (0.20–0.24 in). The most distinctive feature of these spiders is their two very large eyes, which is typical for jumping spiders. Although they have eight eyes, the two at the front are the largest and give them excellent binocular vision. These tiny spiders are black with white hairs that form stripes.

Zebra spiders are widespread across Britain, Europe, and North America,[1] and are found throughout the Holarctic. They often live close to or in human settlements. They can be found on walls, plants and fences on sunny days; and also indoors on window sills, often in the corner behind curtains.