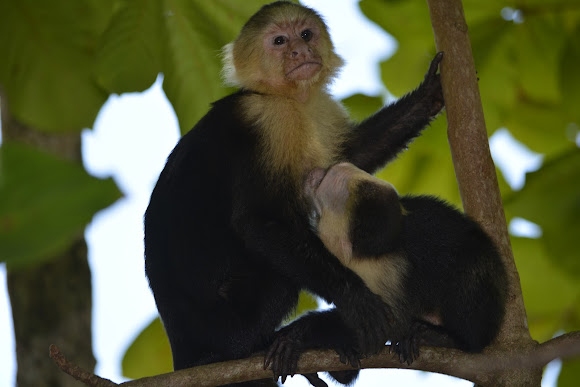 This Group of Capuchin Monkeys are very friendly or overly friendly to visitors of Manuel Antonio Park. Although there were instruction and signages against feeding the animals in the Park, some visitors still do, especially to the Monkeys to the extend that sometimes, they even come up directly to visitors and attempting to grab food, drinks and bags from visitors. Otherwise, they are quite fun to observe as shown in the series of pictures, displaying their mood and characters. The white-headed capuchin (Cebus capucinus), also known as the white-faced capuchin or white-throated capuchin, is a medium-sized New World monkey of the family Cebidae, subfamily Cebinae. Native to the forests of Central America and the extreme north-western portion of South America, the white-headed capuchin is important to rainforest ecology for its role in dispersing seeds and pollen. Among the best known monkeys, the white-headed capuchin is recognized as the typical companion to the organ grinder. In recent years the species has become popular in North American media. It is a highly intelligent monkey and has been trained to assist paraplegic persons. It is a medium-sized monkey, weighing up to 3.9 kg (8.6 lb). It is mostly black, but with a pink face and white on much of the front part of the body, giving it its common name. It has a distinctive prehensile tail that is often carried coiled up and is used to help support the monkey when it is feeding beneath a branch. In the wild, the white-headed capuchin is versatile, living in many different types of forest, and eating many different types of food, including fruit, other plant material, invertebrates, and small vertebrates. It lives in troops that can exceed 20 animals and include both males and females. It is noted for its tool use, including rubbing plants over its body in an apparent use of herbal medicine, and also using tools as weapons and for getting to food. It is a long-lived monkey, with a maximum recorded age of over 54 years.