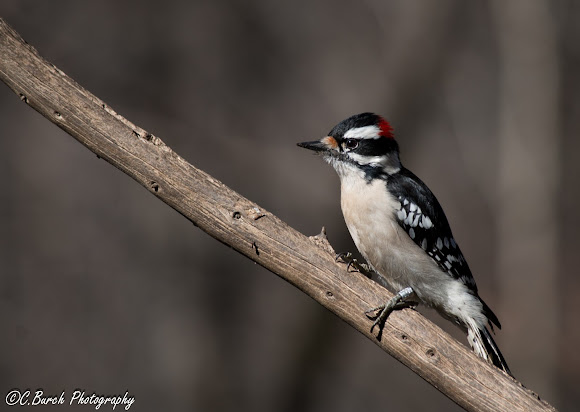 From Wiki: Adult downy woodpeckers are the smallest of North America's woodpeckers but there are many smaller species elsewhere, especially the piculets. The total length of the species ranges from 14 to 18 cm (5.5 to 7.1 in) and the wingspan from 25 to 31 cm (9.8 to 12.2 in). Body mass ranges from 20 to 33 g (0.71 to 1.16 oz). Standard measurements are as follows: the wing chord is 8.5–10 cm (3.3–3.9 in), the tail is 4–6 cm (1.6–2.4 in), the bill is 1–1.8 cm (0.39–0.71 in) and the tarsus is 1.1–1.7 cm (0.43–0.67 in).[2][3][4] The downy woodpecker is mainly black on the upperparts and wings, with a white back, throat and belly and white spotting on the wings. There is a white bar above the eye and one below. They have a black tail with white outer feathers barred with black. Adult males have a red patch on the back of the head whereas juvenile birds display a red cap. The downy woodpecker is virtually identical in plumage pattern to the much larger hairy woodpecker, but it can be distinguished from the hairy by the presence of black spots on its white tail feathers and the length of its bill. The downy woodpecker's bill is shorter than its head, whereas the hairy woodpecker's bill is approximately equal to head length. The downy woodpecker gives a number of vocalizations, including a short pik call. Like other woodpeckers, it also produces a drumming sound with its beak as it pecks into trees. Compared to other North American species its drums are slow.[5]

Downy woodpeckers are native to forested areas, mainly deciduous, of North America. Their range consists of most of the United States and Canada, except for the deserts of the southwest and the tundra of the north. Mostly permanent residents, northern birds may migrate further south; birds in mountainous areas may move to lower elevations.[citation needed] Downy woodpeckers nest in a tree cavity excavated by the nesting pair in a dead tree or limb. In the winter, they roost in tree cavities. Downy Woodpeckers forage on trees, picking the bark surface in summer and digging deeper in winter. They mainly eat insects, also seeds and berries. In winter, especially, downy woodpeckers can often be found in suburban backyards with trees and will feed on suet at birdfeeders.