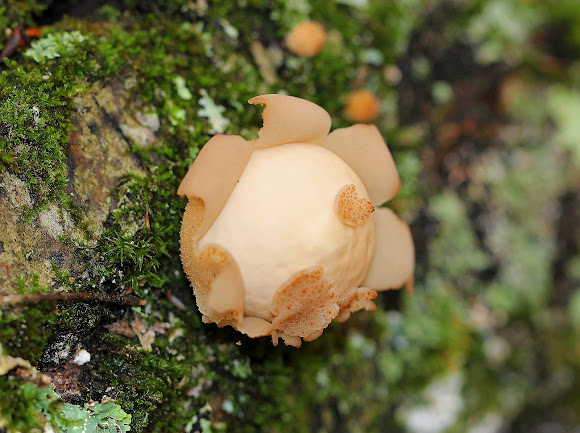 Stump puffball that was peeling and looked like an earthstar! There were tons of puffballs in various states of decay on the tree, but this was the only one that resembled an earthstar. Round shape when young, but becoming pear-shaped when mature. Also, when mature, they develop a central hole through which spores are liberated by rain. This spore ball was approximately 2-3cm in diameter.

Growing on a partly fallen, rotting tree in a mixed forest.

Puffballs in various stages of maturity. Some already have apertures through which the spores have dispersed. These fungi are called puffballs because "puffs" of brown spores are released through the aperture when the mature fruiting body bursts. Also, they look like "balls". Hence the name "puffballs".

Thanks Lisa. No, the inside was powdery and brown (I opened the one from photo 2). It was identified as Geastrum sp. on mushroom observer, but I'm not sure because to me, it just looks like a puffball that is peeling in a weird way. Also, it seems uncharacteristic for an earthstar since the spore ball isn't sitting on the arms and these were growing on a tree. Hmmm. Not sure what to think.

Gorgeous! The interior was fully white?