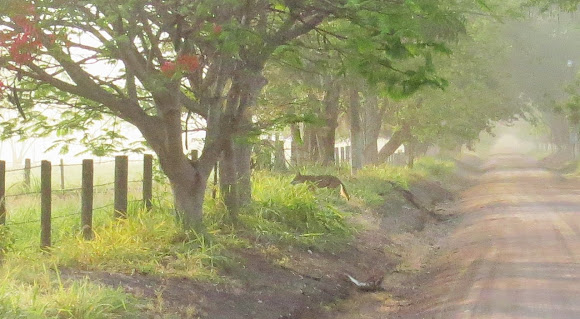 This coyote was long-limbed and slim, possibly a female based on the smallish head and slim build. Coyotes have been present on the university campus about two years (since mid or late 2015), but prior to that year, none were present at least since I moved to the campus in early 2011. Their presence is fairly easy to detect, based on hearing the yelping/howling of the packs at night. But they are seen rarely. Apart from a cell phone video made by a colleague a few months ago, this may be the first photo obtained on the campus.

Horse and cattle pastures, in a valley about 770 meters elevation.

This individual was photographed at 6:05 am, as it trotted across a farm road near the edge of the university's residential campus (the border of the dairy farm and the equestrian club). It was moving very fast; I did not have enough time to even zoom in for a better photo. It disappeared quickly in the grass. The locality marker provided is exactly precise.