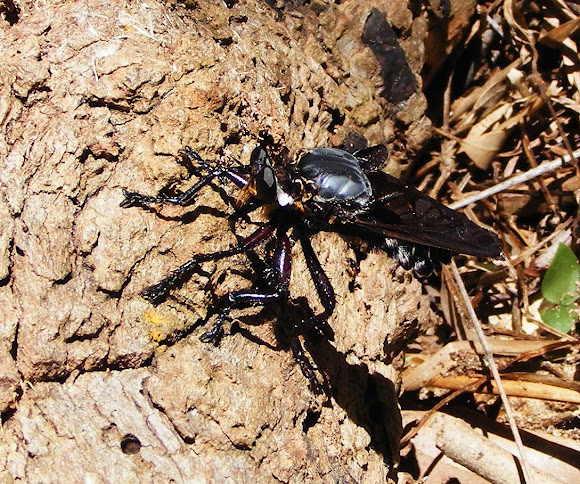 Suggestions include Giant Yellow Robber Fly This "fly" landed while I was photographing another insect. It landed and then immediately flew off. My camera has a very slow take up so I was lucky to get it at it at all but my impression is of the largest fly I have ever seen. I have included the image showing the background and those leaves are 75 to 120mm or three to over four inches. I have always been worried that this image was something like those photos of bigfoot or something. Anyway. This feels like the place to share it It has been suggested by Peter Chew that it is a Blue Robber Fly. I looked into that but am unconvinced as the size is too small and the colour wrong. I think this may be a new one

Thanks Livan. I think the specimen in this image is too large to be even the Giant Yellow Robber Fly of the Brisbane Insects page but may be a relative or a larger version. I will add it as keywords in case someone else is looking. Closer and closer :-)

Maybe the Giant Yellow Robber Fly - Blepharotes coriarius. You wouldnt see the yellow of the top abdomen when at rest like this???
http://www.brisbaneinsects.com/brisbane_...

Thanks Livan, I will head off and check that page out

LOL, No bigfoot...though that fly has pretty big feet I guess. This is a Robber Fly of some kind. I'm not very familiar with animals in Australia but here is a nice page I found:
http://www.brisbaneinsects.com/brisbane_...
Maybe a Giant Robber Fly, Phellus olgae ???Though I don't see all the golden hairs.
http://www.brisbaneinsects.com/brisbane_...