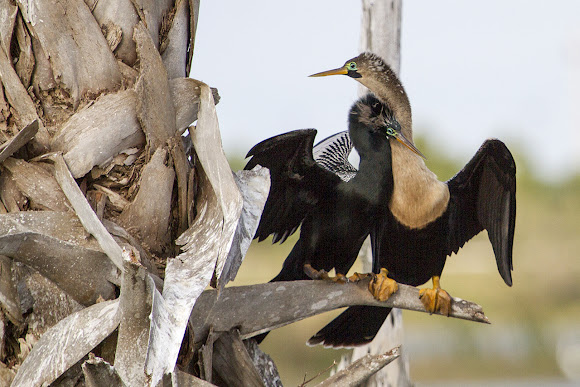 These marvelous waterfowl have a dramatic mating ritual in which they dance together with their long necks in various maneuvers. I was blessed to be able to capture their romantic antics with my camera. The male Anhinga builds a rough nest before having a mate, in hope of attracting one with his architectural skills and good looks. Once obtaining a fine wife, he continues to gather nesting material and present it to the female in hopes she will accept it and integrate it into the growing nest. If she accepts his offering she then weaves it into the nest. Both are highly interested in this procedure. He busily hunts for the right materials, she eagerly waits and looks to see what he brings, the male is intrigued to see what she will do with his gift, and so on and so forth.

The Anhinga lives in shallow, slow-moving, sheltered waters and uses nearby perches and banks for drying and sunning. It's rarely found out of freshwater except during severe droughts. Generally not found in extensive areas of open water, though it may nest on edges of open bays and lakes. Breeds near freshwater, often in association with other waterbirds such as herons, egrets, ibises, storks, and cormorants. The Anhinga may also breed in saltwater colonies and feed in fresh water. The Anhinga dives from the surface of the water and swims slowly underwater stalking fish around submerged vegetation. The diet consists of many small- to medium-sized wetland fishes, with very small amounts of crustaceans and invertebrates. Anhingas typically spear fish through their sides with a rapid thrust of their partially opened bill. Usually stabs with both mandibles, but may use upper mandible only on small fish. The side-spearing habit of the Anhinga suggests that the usual hunting method is by stalking rather than pursuit.

Greg please consider joining and adding to my mission Birds seen in Florida http://www.projectnoah.org/missions/1794.... Just need 2 more members to get the elusive patch. Thank you in advance

Fantastic Greg. Where were these? The Viera Wetlands?

Thank you for your comment http://www.projectnoah.org/users/Gilma%2... , It was a true wonder to behold.

They are just dancing beautifully, they are lovely, their eyes are incredible. Thank you for sharing, GregMasteller.