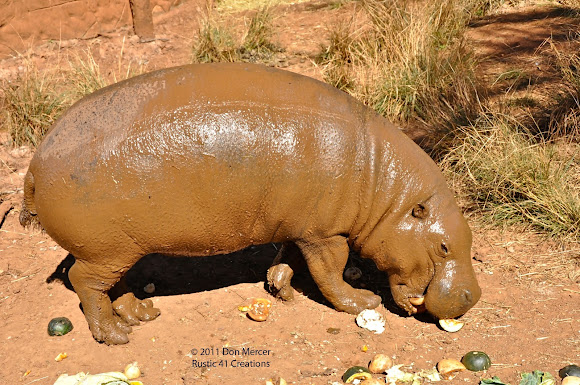 Hippos have barrel-shaped torsos and appear to be sluggish. However, they can outrun humans and have been clocked over short distances at speeds up to 19 mph. After the elephant and rhino, the hippo is the third largest extant land mammal and can weigh up to three tons, or six thousand pounds. Hippos are very aggressive.

The hippopotamus is a semi-aquatic animal that inhabits rivers, marshes, and mangrove swamps. These animals are social and may usually be found in groups of five to thirty. However, eating is a solitary exercise. During the day, most remain in the water or mud to stay cool; while, at night, they may exit the water and graze on grasses. They are mostly herbivores. Historically, hippos were found throughout most of sub-Saharan Africa and also once inhabited the Nile River as far north as the Mediterranean Sea. Today, however, they are prevalent in game reserves and national parks and in particular areas, such as the Okavango Delta in Botswana, where water is in great abundance.

This young hippo was seen at the Rhino & Lion Park outside Johannesburg. When in Africa, several guides and outer sources stated that the most human deaths occurring on that continent every year are attributable to hippos, with the statistics for 2012 thought to be in excess of 3,000 hippo-related human fatalities.