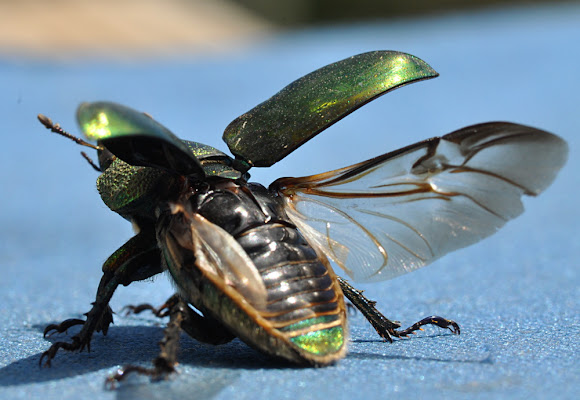 The Golden Stag Beetle, Lamprima aurata is a species of beetle in the Family Lucanidae. It measures between 15 and 25 mm in length and is relatively common in the East of Australia. It feeds mainly of vegetation like Eucalyptus or Acacia.

The male is golden, and has large antennae, which gives the species their common name. The females are mainly metallic green and orange, while their legs are electric blue. The are also commonly called 'Christmas beetles' because that is the time of year they emerge.

These are stunning photos, Lori. A wonderful spotting.

Thanks Leanne for giving me a prod to post something. She was clearly wanting to fly away, so I just kept snapping. So hard to get the timing right Serge. A lot of luck involved.

Such a great series. The first photo is a cracker!

Great series Loritas,congrats and thanks for sharing

I love these open wings photos!

Yeah I'm glad my partner is a bugger too :-)

Thanks Mark. That blue is my mouse pad. My partner has a habit of leaving bugs in jars in front of my computer. Best partner.