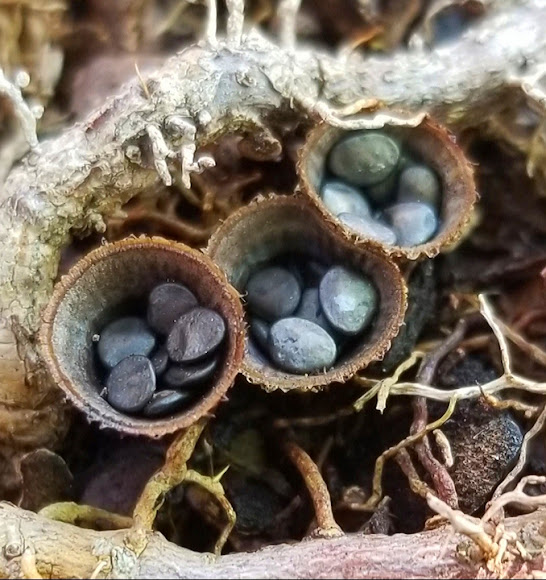 This is a very small fungus that resembles a birds nest with eggs inside the cup. The genus us (Cyathus) which are the group of birds nest fungi. The Dung-loving birds nest fungi has brown Peridioles, which are structure that gives rise to and contains the female reproductive cells. The scientific name (stercorarius) means "of dung" in Latin.

It was found in an we moist pot with lots of roots and twigs. The soil was like a sponge covered in roots. The climate was very cold near the 50's at night and 80's during the day making it a perfect habitat for this species. Found in sub-urban, Fort Worth, Texas. Many have been found around 20 of them.

This species has papery perida or outside covering was like a paper wasp nest and quite tough to the touch. The fungus is known to have a worldwide distribution, and Curtis Gates Lloyd, in his monograph on the Nidulariaceae, wrote that it "probably occurs in every country where manure occurs".

Thank you for the nomination.

Thanks, this name was probably created due to the fact that they form in types of dung, in this case mulch that contained cow dung.

Who comes up with these names? I love it :)