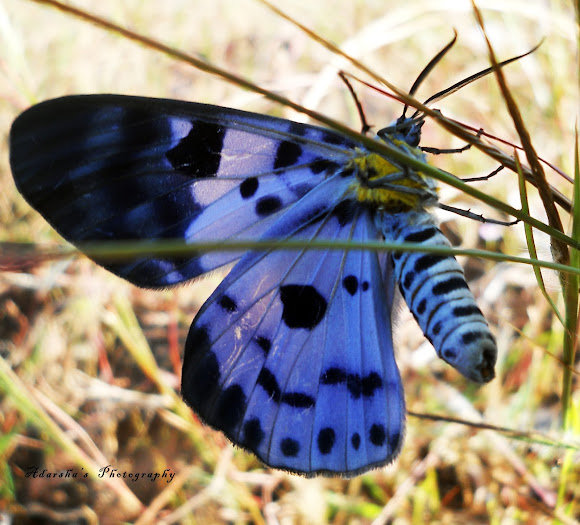 The Blue Tiger Moth (Dysphania percota) is a moth of the Geometridae family that can be found in India. The larvae feed on Carallia species.

Many Geometrids have slender abdomens and broad wings which are usually held flat with the hindwings visible. As such they appear rather butterfly-like but in most respects they are typical moths: the majority fly at night, they possess a frenulum to link the wings and the antennae of the males are often feathered. They tend to blend in to the background, often with intricate, wavy patterns on their wings. In some species, females have reduced wings and are flightless (e.g. winter moth and fall cankerworm). Most are of moderate size, about 3 cm across but a range of sizes occur. They have distinctive paired tympanal organs at the base of the abdomen (lacking in flightless females).

what a nice moth!!

Thank you so much Env!

@Ruby : Thank you..I too thought it is butterfly until Ashish told n convinced me that its a moth! still cant believe my eyes :)

But fantastic Adarsha B S

I too thought this as butterfly.

@Ashish : Yeah...when i saw your suggestion, i got surprised! When i saw it, i considered it as butterfly only !

If you observed they took calm long flights with lot of flickering of their wings. You assume sometimes they are butterflies....

Thank u for the ID Ashish..There were hundreds of them throughout our trek route! But very difficult to get!

Thank you Nuwan!
He came and sat on my friend's hand....

Adarsha I spotted this beauty 3 times on high hill with undisturbed green forest.