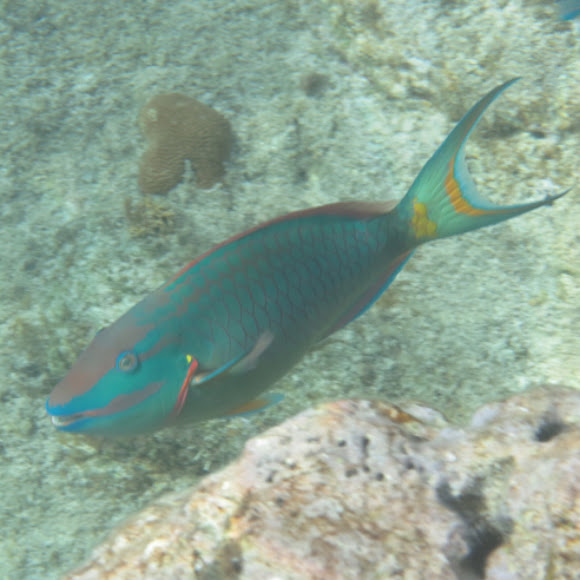 Coloration of the stoplight parrotfish varies greatly, dependent upon what phase the fish is in. During the initial phase, both males and females are mottled reddish brown, often mixed with white scales, on the upper two thirds of the body while the belly is bright red. There are horizontal rows of five pale spots located on the flanks. The dorsal fin and second half of the caudal fin are reddish brown, the anal and pectoral fins are bright red, and the first half of the caudal is white. Stoplight parrotfish juvenile ©George Ryschkewitsch As juveniles, the stoplight parrotfish has three rows of white spots running the entire length of the body, over a dark reddish-brown body. The belly is paler in color and there is a white bar on the caudal fin. Terminal phase males are green with diagonal orange bands on the upper half of the head. There is an orange cresent-shaped indentation on the caudal fin. A yellow spot is located near the top of the gill slit and another at the base of the caudal fin.