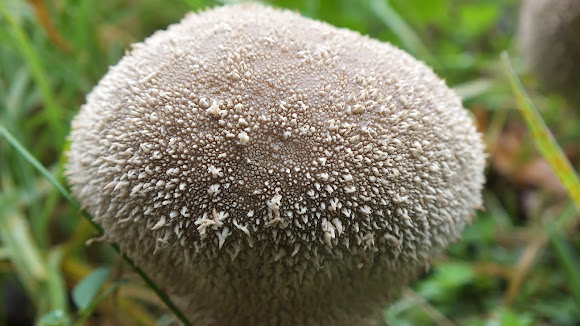 This fungus comprises two parts. The upper, globe-like section, which is white at first and turns ochre as it ages, is initially covered in soft, pointed warts; these fall off to leave a smooth, matt surface. Inside this rounded head the spores develop. The lower stem-like section comprises sterile material and soon develops a wrinkled skin. Growing to a height of 10 to 20cm; head diameter 4 to 10cm; stipe diameter usually about half the head diameter. The stem is parallel or slightly tapering in at the base; spongy; surface soon becoming wrinkled; initially white with pointed warts, but later turning ochre and becoming smooth and leathery. The stems of these large puffballs expand once the head has ruptured and released the spores, and then they remain intact throughout the winter and into the following summer.

These tall puffballs are found in all kinds of open woodland - most particularly on woodland edges and clearings - and sometimes under hedgerows.