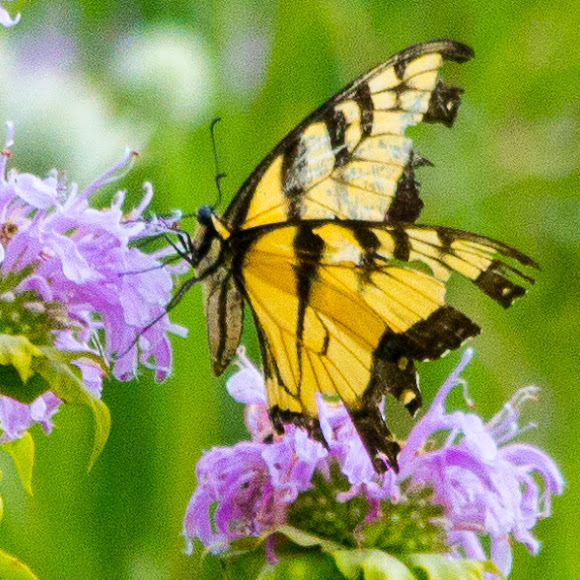 a species of butterfly native to eastern North America. It is one of the most familiar butterflies in the eastern United States, where it is common in many different habitats and travels as far North as Winnipeg Manitoba, Canada. It flies from spring to fall, during which it produces two to three broods. Adults feed on the nectar of many species of flowers, mostly from those of the families Apocynaceae, Asteraceae, and Fabaceae. P. glaucus has a wingspan measuring 7.9 to 14 cm (3.1 to 5.5 in). The male is yellow with four black "tiger stripes" on each forewing. Females may be either yellow or black, making them dimorphic. The yellow morph is similar to the male, but with a conspicuous band of blue spots along the hindwing, while the dark morph is almost completely black. The green eggs are laid singly on plants of the families Magnoliaceae and Rosaceae. Young caterpillars are brown and white; older ones are green with two black, yellow, and blue eyespots on the thorax. The caterpillar will turn brown prior to pupating. It will reach a length of 5.5 centimetres (2.2 in). The chrysalis varies from a whitish color to dark brown. Hibernation occurs in this stage in locations with cold winter months. The wingspan ranges from 7.9 to 14 cm (3.1 to 5.5 in) with females being the larger sex. Southern individuals are larger than northern ones. Males are yellow with four black "tiger stripes" on each forewing. The outer edge of the forewing is black with a row of yellow spots. The veins are marked with black. The postmedian area of the hindwing is black with yellow spots along the margin. The inner margin of the hindwing has small red and blue spots. The ventral forewing margin has a yellow bar that is broken into spots. This broken bar is present in both sexes, and is used to distinguish P. glaucus from its close relatives. Females are dimorphic. The yellow morph differs from the male in having a blue postmedian area on the dorsal hindwing. In the dark morph, the areas that are normally yellow are replaced with dark gray or black. The bluish postmedian area on the ventral hindwing has one row of orange spots. A shadow of the "tiger stripes" can be seen on the underside of some dark females.

Maybe a bird or just some flight wear, nobody will know except the butterfly(:.
Love to see these butterflies flying in our yard as well, such a stunning butterfly.

Would love to know if anyone can tell me what is going on with the hind parts of its wings. Looks like it has seen better days. Ornithopter, you out there?