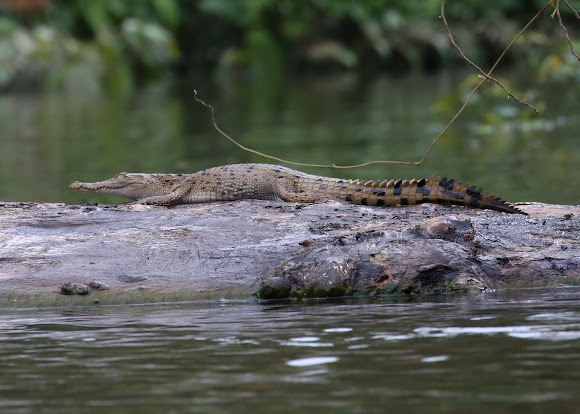 Medium sized crocodile with males reaching lengths of 3.5m and females 2.7 - 3m although in both, larger animals have been reported. This specimen estimated at around 1.8 - 2m long. A grey brown colour with darker patches and some banding on the tail. These fade with age so assuming this spotting is a younger animal. The snout is pointed and quite narrow, again especially in younger animals and broadens with age.

There are two distinct populations of this species, a northern and southern one. This spotting is of the southern group found in the Ketu River, a tributary of the Fly River near Kiunga, PNG.

Both populations of this crocodile are separated by a mountain range and small differences between the populations exist such as skull morphology and scale arrangement. Ref: Wikipedia New Guinea Crocodile

Congratulations Bob for your spotting of the week

Thank you Jim. Appreciate the support.

Thank you again Polilla. If anyone is interested in my collected spotting from PNG, I have started a new mission The Fauna and Flora of Papua New Guinea. Anyone is most welcome to join and or add relevant spottings. I have a few more to add over the next week or two.

Thank you Scott. Incredible place to work. Hope your memories are good ones. Rob.

Thank you Pradeep for your support.

Thank you Ashley and PN Rangers for the SOTW. Very happy to show case some of the astonishing species of PNG.

Very nice, and brings back memories for me, since I started out working with wildlife (both this species and C. porosus specifically) in this very area, oh so many years ago. :-)

Congratulations for the spotting of the week!

Congrats Robert, this awesome crocodile has been selected as Spotting of the Week!

Thank you Ashley. I appreciate the nomination.

Thank you Polilla. Not exactly cute but beautiful none the less.