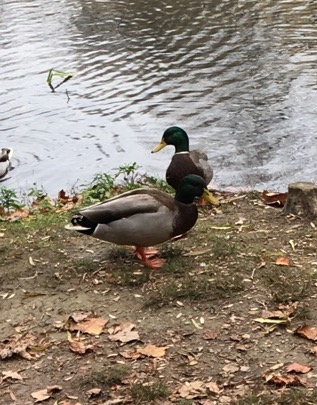 I saw these mallard ducks, at the edge of a pond. Phylum: Chordata Class: Aves Order: Anseriformes Family: Anatidae Genus: Anas Species: A. platyrhynchos - The mallard or wild duck, is a dabbling duck. This duck belongs to the subfamily Anatinae, of the waterfowl family Anatidae. The mallard is a medium-sized waterfowl species, although it is often slightly heavier than most other dabbling ducks. The mallard is omnivorous, and very flexible in its food choice. The majority of the mallard's diet, seems to be made up of gastropods, invertebrates ( including beetles, flies, lepidopterans, dragonflies and caddisflies ), crustaceans, worms, many varieties of seeds and plant matter, and roots and tubers. Plants generally make up a larger part of the bird's diet, especially during autumn migration and in the winter. It usually feeds by dabbling for plant food or grazing. The mallard, is one of the most recognizable waterfowl, in the world. Genus: Anas - Members of this group, are the dabbling ducks or surface-feeding ducks. It prefers to forage in water, that is less than 16 inches deep, so it can duck its head down, and reach plants at the bottom. The mallard, sometimes forages on farmland for grains like rice, corn, oats, wheat and barley. The male mallard is called a drake, and the female a hen. Baby mallards are called ducklings.

Mallards live in wetlands, eat water plants and small animals, and are social animals, preferring to congregate in groups or flocks of various sizes. The mallard inhabits a wide range of habitat and climates, from Arctic tundra to subtropical regions. It is found in both fresh and salt-water wetlands, including parks, small ponds, rivers, lakes and estuaries, as well as shallow inlets and open sea, within sight of the coastline. They are attracted to bodies of water, with aquatic vegetation. They are a common sight in urban parks, lakes and ponds. The mallard lives in marshes, lakes, swamps, rivers, streams and ponds. Mallards prefer calm, shallow sanctuaries, but can be found in almost any body of freshwater. They're also found in saltwater and brackish water, and are commonly found in wetlands.

I saw these male mallards, at the edge of a pond.