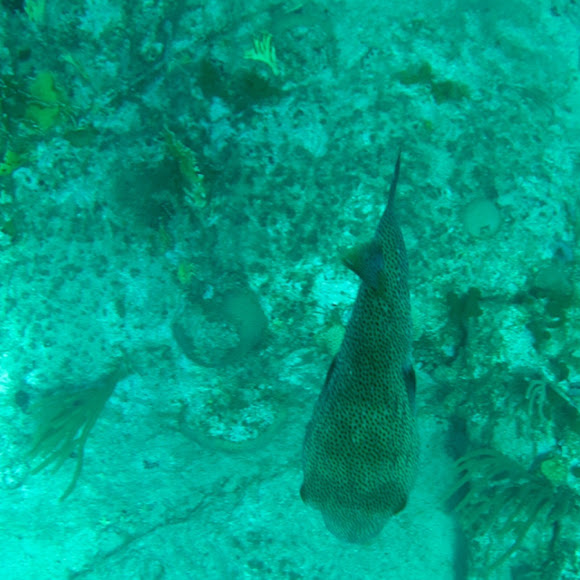 The porcupinefish gets its name from the numerous long spines located all over the head and body. There are approximately 20 spines in a row between the snout and dorsal fin. It is a member of the puffer fish family Diodontidae. These fish are capable of expanding their body size by taking in water and inflating when threatened. The spines of the porcupinefish only stick out when the fish is inflated, at all other times the spines lay flat against the body. When fully inflated, the fish has a formidable presence that makes predators think twice about taking a bite. Body is grayish-tan with small black spots but lacking large dark blotches. The underside is white surrounded by a dusky ring. The porcupinefish closely resembles its relative the balloonfish (Diodon holocanthus) which also is covered in spines. They can be distinguished from each other by noting the different body shapes and the different patterns of spots on the skin. The porcupinefish is larger than the balloonfish, with a wider head, and has small black spots that cover the body and fins.

ESTABLISHED IN1980 | AREA: 800 ACRES (INCLUDING DEAD CHEST ISLAND) The Wreck of the Rhone is the first and only Marine National Park in the British Virgin Islands. It is the most celebrated dive site in the BVI, and a major recreational attraction. The park includes examples of fringing reef habitat and sea grass beds. The wreck is that of a Royal Mail Steamer, which sunk during the hurricane of 1867 with 125 people on board. At 310 feet long and 40 feet wide, the wreck of the Royal Mail Steamer lies in two main parts in waters between 30 and 90 feet deep. Much of it is still intact and visible, including decking, parts of the rigging, the steam engine, and propeller. The marine park stretches from Lee Bay on Salt Island westward to include Dead Chest Island. The ship's anchor broke away outside Great Harbour, Peter Island, and this site forms the second portion of the park. The park is used by several commercial dive operators daily. Other dive sites in the park include Rhone Reef, Blonde Rock, and Painted Walls. Anchoring is strictly prohibited in the area in and around the Rhone. The National Parks Trust has installed mooring buoys for use by all commercial, charter, and private vessels. If moorings are unavailable around the Rhone, vessels are required to use the Salt Island Settlement or Peter Island anchorages.