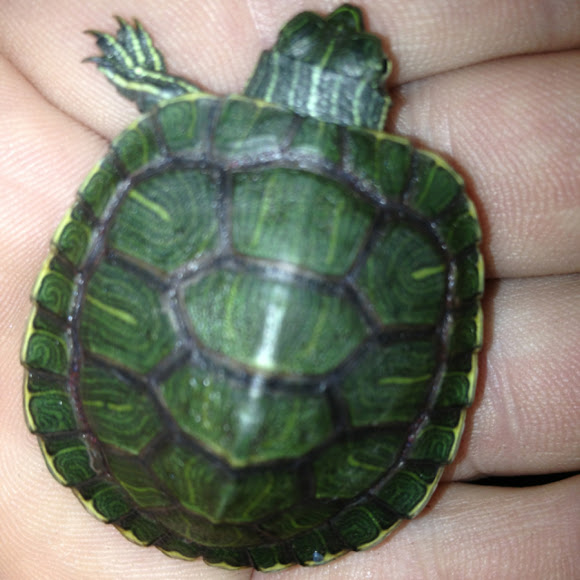 Baby male red ear slider turtle I caught: The female red-eared slider grows to be 25–33 cm (10–13 in) in length and males 20–25 cm (8–10 in). The red stripe on each side of the head distinguishes the red-eared slider from all other North American species. The carapace (top shell) is oval and flattened (especially in the male), has a weak keel that is more pronounced in the young, and the rear marginal scutes are notched. The carapace usually consists of a dark green background with light and dark highly variable markings. The plastron (bottom shell) is yellow with dark, paired, irregular markings in the center of most scutes. The plastron is highly variable in pattern. The head, legs, and tail are green with fine, yellow, irregular lines. Some dimorphism occurs between males and females. Male turtles are usually smaller than females but their tail is much longer and thicker.[5] Claws are elongated in males to allow a better grip on the carapace of females during mating. Typically, the cloacal opening of the female is at or under the rear edge of the carapace, while the male's opening occurs beyond the edge of the carapace. Older males can sometimes have a melanistic coloration, being a dark grayish-olive green, with markings being very subdued. The red stripe on the sides of the head may be difficult to see or be absent.

semiaquatic turtle belonging to the family Emydidae. It is a subspecies of pond slider. It is the most popular pet turtle in the United States and also popular in the rest of the world. It is native only to the southern United States, but has become established in other places because of pet releases and has become an invasive species in many introduced areas, like California, where it outcompetes the native western pond turtle.

I find them to be very easy to tame

What a great first spotting!