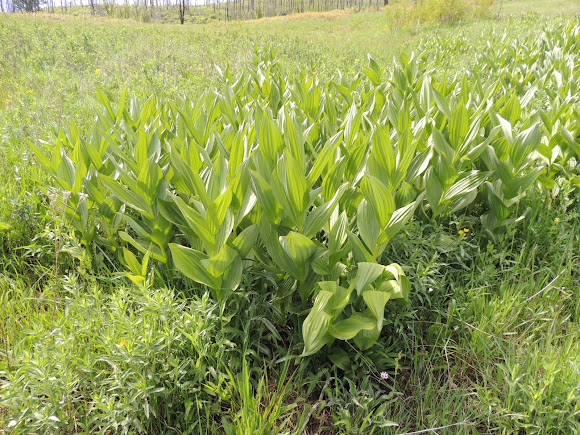 Bright green, tall forb with large pleated leaves. This plant can reach seven to eight feet (2 meters) in height. When in bloom, the plant produces small greenish white flowers. They are most often found in open and wet, subalpine areas near streams. I have encountered large fields of these on several backpacking trips though I have never seen them in bloom.

This forested area is located within the Sugarite Canyon State Park which had suffered major devastation from the 2011 track fire. The fire burned massive amounts of trees and ground vegetation which forced the park to close for several months. The severity of the track fire is still seen today. Approximately 27,000 acres of surrounding land was burned, fish populations were completely decimated in the park's lakes and rivers due to massive amounts of ash. It has since recovered quite a bit and is full of green life; though signs of massive amounts of burned and felled Ponderosa Pines still haunts the area. Despite the obvious destruction I thoroughly enjoyed my time hiking through the park's mountains and was very impressed with abundant presence of flora and fauna.