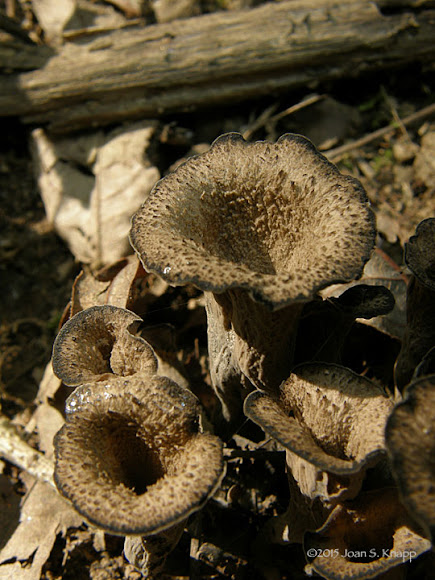 Chanterelles are 1¾-4½" (5-12 cm) tall and ⅜-1¾" (1-5 cm) wide; dark gray, tan, dark brown, even nearly black. Instead of a dome-shaped cap, black trumpets have a trumpet- or funnel-shaped appearance; gills run down the sides of the stalk, though they aren’t always visible; spore prints may be whitish, pale yellow, or pink.

Black trumpets may be found in the woods, under oak, tanoak, manzanita, madrone, or huckleberry, usually nestled among mosses. Sometimes they’re practically invisible. These were found in a deciduous forest on a dry forest floor.

Black trumpets are considered to be delicious, and among the most prized finds of mushroom hunters. Until recently, three different species, Craterellus cornucopioides, Craterellus fallax, and a lighter-brown near twin, Craterellus konradii, were considered to be the same species. DNA sequencing has established that these are distinct species. This observation has been identified by Walter Sturgeon on Mushroom Observer (http://mushroomobserver.org/268568).