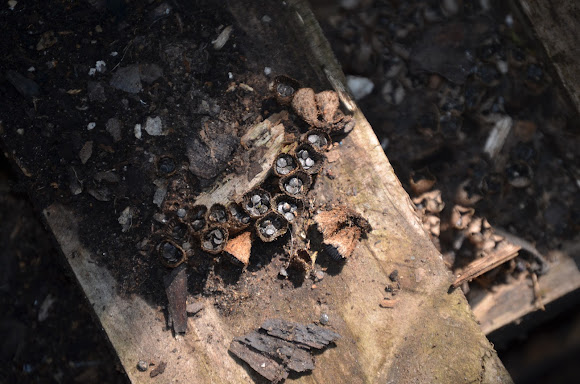 Commonly known as the bird's nest fungi, their fruiting bodies resemble tiny egg-filled birds' nests. The nests are "splash-cups" - when a raindrop hits one at the right angle, the walls are shaped such that the eggs are expelled to about 1 m away from the cup in some species. Some species have a sticky trailing thread, a funicular cord, attached to the peridiole. If that thread encounters a twig on its flight, the peridiole will swing around and wrap itself around the twig. The spores are thought to be ingested by herbivores and grow in their droppings to continue the life cycle.

They are saprobic, which means they feed on on decomposing organic matter, such as decaying wood and in soils enriched with wood chips or bark mulch. Widespread distribution in most ecological regions. Five genera: Crucibulum, Cyathus, Mycocalia, Nidula, and Nidularia that are distinguished from each other by differences in morphology and peridiole structure.

I was so excited to find these beautiful little mushrooms in my greenhouse today. We have the plant pots sitting on top of old wood palettes, which Im sure makes a perfect environment for these to thrive!

Great find. I remember how much my first bird-nest find made me smile as they were so unexpectedly small.