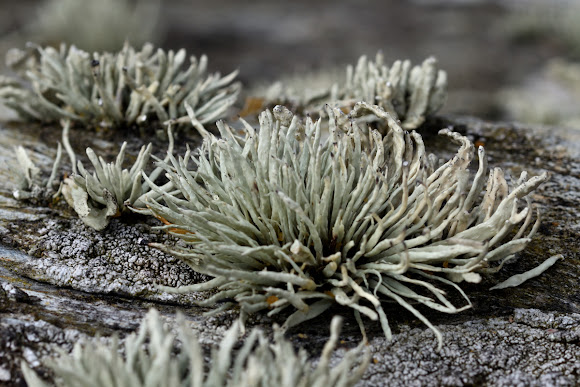 Lichens colonize the more aggressive environments. In this case, it colonizes the exposed, hard coastal rocks of a sea cliff where it is exposed to occasional splashing of sea water. R. cuspidata has a fruticose thallus, tufted, erect, blackened right at the base ivory in colour with small but conspicuous black pycnidia, branches narrow, flattened or ± rounded in cross section. Apothecia are frequent, rather button-like on the narrow branches. Generally on base-poor, coastal rocks, locally abundant where there is suitable habitat. R. cuspidata is easily confused with R. siliquosa, with which it may be inter-mixed. The common name "Sea Ivory" is considered to apply to R. siliquosa, but in fact the present species is smoother and more ivory-like and may well have been the original Sea Ivory, inasmuch as the two species would have been distinguished.