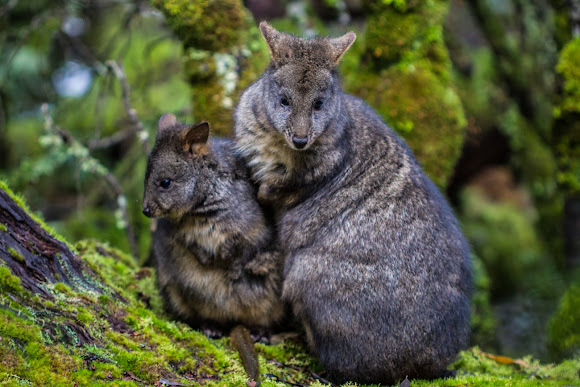 The pademelon is a stocky animal with a relatively short tail and legs to aid its movement through dense vegetation. It ranges in colour from dark-brown to grey-brown above and has a red-brown belly. Males, which are considerably larger than females, have a muscular chest and forearms, and reach up to 12 kg in weight and 1 - 1.2 m in overall length, including the tail. Females average 3.9 kg in weight.

wet forest is the preferred habitat, although wet gullies in dry open eucalypt forest are also used.The diet of the pademelon consists of herbs and green shoots, with short green grasses being preferred. Mosses are occasionally eaten.

The unusual common name, pademelon, is of Aboriginal derivation. It is also sometimes referred to as the rufous wallaby. Pademelons are small marsupials of the genus Thylogale. This species is extinct on mainland Australia because of predation by foxes and large scale land clearance, although two other species of pademelon occur along the east coast of the mainland. In Tasmania, however, the pademelon is both widespread and abundant.

Big congrats on the SOTD, charlie!

Thankyou everyone for the messages =)
Oh Leuba ....i am so glad you did , they are plentiful in the Cradle area..the two together i spotted out the window ...and was lucky enough to crepp out and get a picture, they where in an excellent spot with all the lush greenery :)

Congrats Charlie on the deserving SOTD!

Congratulations Charlie. We had some very curious pademelons visit us at our cabins at Cradle Mountain. Definitely a beautiful and peaceful place.

Thanks Mark =) ..I am really happy to know it's a new one for you AngelSeven , thankyou for the awesome feedback .

Lori , i can't get enough of Cradle ...missed the snow by the weekend ...so have an excuse to go back ...not that you really need an excuse ;)

Cradle Mountain is such a great place to see so much of what this state has to offer, Charlie. All the animals there seem so perfectly at home in the lush mossy green forests, and on the button-grass tan meadows.

Fantastic photo...! A new species to me, never heard of one before...! Congrats on the SOTD well deserved...!

Congrats on the SOTD.

Thanks Neil and Lori , had a nights getaway up to Cradle Mountain , was photographing fruiting Lichen , but the wildlife kept stealing my attention =)

Snagged some of your info, Charlie, thanks. Here's Violet and Poppy, my orphan pademelon joeys. http://www.projectnoah.org/spottings/165...

Beautiful photo, Charlie. I've got two 700 gram female joeys running round my living room at the moment. I registered as a wildlife carer last year and have had one Bennetts wallaby & these two pademelons thus far. I'll put up a "spotting" so you can see them.

Thanks so much Yasser and PN for the SOTD. =)

Congrats Charlie! These wonderful photos and fascinating facts have been chosen as our Spotting of the Day! Thanks again for all of your fantastic contributions and we can't wait to see what you share next :)

Glad you enjoy these cuties =)

Awesome spotting Charlie,beautiful,congrats and thanks for sharing