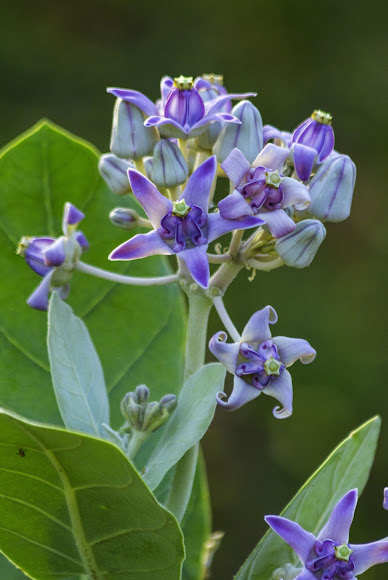 Calotropis gigantea, the crown flower, is a species of Calotropis native to Cambodia, Bangladesh, Indonesia, Malaysia, the Philippines,[citation needed] Thailand, Sri Lanka, India, China, Pakistan, Nepal, and tropical Africa.It is a large shrub growing to 4 m (13 ft) tall. It has clusters of waxy flowers that are either white or lavender in colour. Each flower consists of five pointed petals and a small "crown" rising from the center which holds the stamens. The aestivation found in calotropis is valvate i.e. sepals or petals in a whorl just touch one another at the margin, without overlapping. The plant has oval, light green leaves and milky stem. The latex of Calotropis gigantea contains cardiac glycosides, fatty acids, and calcium oxalate. The roots also contain Calotropone. It is the host plant for Hawaii's non-migratory monarch butterflies.[3] Calotropis is an example of entomophily pollination (pollination by insects) and pollination is achieved with the help of bees. In Calotropis, gynostegium is present (formed by the fusion of stigma and androecium). The pollen are in a structure named pollinia which is attached to a glandular, adhesive disc at the stigmatic angle (translator mechanism). These sticky discs get attached to the legs of visiting bees that pull out pollinia when a bee moves away. When such a bee visits another flower, this flower might be pollinated by the pollinium. Habit : A large shrub, much branched, gregarious, young branches covered with white, cottony hairs, contains milky latex. Stem : Erect, branched, cylindrical, solid, contains milky latex. Leaves : 4-8 inches long, decussate, obovate or elliptic-oblong, shortly acute, subsessile, cordate or often amplexical at the base. Inflorescence : Umbellate cymes. Flowers :Large, white, not scented, peduncles arising between the petioles. Flower-buds ovoid, angled, Calyx lobes 5, divided to the base, white, ovate; corolla broadly rotate, valvate, lobes 5, deltoid ovate, reflexed, coronate-appendages broad, obtusely 2-auricled below the rounded apex which is lower than the staminal-column. Stamens 5, anthers short with membranous appendages, inflexed over the depressed apex of the pentagonal stigma. Pollinium one in each cell, pendulous caudicles slender. Carpels 2 distinct, styles 2, united to the single pentagular stigma, ovary 2-celled, ovules many. Fruit : A pair of follicles with many, hairy seeds. Flowering and Fruiting Time : November-April Common as a weed in waste lands. The root, bark and milk used in medicine for the treatment of dysentery cutaneous affections. The leaves are applied on paralysed parts, painful joints. The milk is useful in leprosy and ringworm.