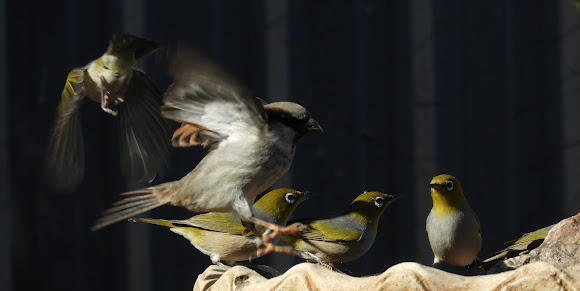 110 - 130 mm in length. Male:- Generally the upper parts are citrine-green with grey back and duskier, citrine-edged flight and tail feathers. The underparts are grey or white, with white eye-ring and dusky lores. In the subspecies there is a wide variation in plumage. The southeastern Australian race (Z. I. familaris) has a citrine-green head, shoulders and rump. A grey back. Throat is pale yellow or yellow-green. Breast is a pale grey to white on belly. A pale yellow undertail. Female:- In any pair she is paler in colouring - - but she may be brighter than the male of a neighbouring pair.

Birdbath in my backyard.

Family Zosteropidae - This family are small, green, arboreal (living in trees) insect and fruit gleaners. Have short, thin, unbristled and unnotched bill. There is a white feather-ring around the eye. Tongue is finely brush-tipped. Sexes are alike. Tail is square cut; wings with well developed tenth outer primary. Sociable, feeding in flocks. Feed by flying from tree to tree and hopping amongst the foliage. To keep in contact they make a mewing call. Mating is temporarily and breeding is done in solitary pairs. Both parents share the nest duties. Nest is a cup of fibre, having plain, light-blue eggs. Silvereye may also be known as Green-backed White-eye; Western/Eastern Silvereye; Grinnell; Grey-backed Silvereye; Grey-breasted Silvereye. Voice:- call is a drawn-out peevish whistled chirp peeeh, in contact. A sharper pyeeew during night migration. Song:- loud stereotyped whistled and trilled warbles. Also a more protracted and varied subsong:- whispering with interwoven mimicry. Quite common garden birds. Silvereye cover most of the coastal and adjacent areas of our Australian mainland (except north and northwest from near Carnarvon (W.A.) to eastern Cape York Peninsula (Q'ld.) Common in Tasmania. After breeding, Silvereye congregate in flocks towards the end of summer and migrate from Tasmania and southern Victoria, north as far as southern Queensland. They usually travel by night, flying high and constantly calling, in whistling chirps, to maintain contact. By day they will feed whilst drifting throughout shrubberies. Not all Silvereye populations move very much, after breeding. Queensland's are mainly locally nomadic. In southern and western Australia they may only move a little inland. Tasmania also has many older breeding pairs that stay put in their chosen territory. Brisk, versatile feeders - they work through low foliage and thickets. Sometimes they hop around on the ground. Food consists of insects:- beetles; flies; aphids, to name a few. Silvereye also pick up seed and take nectar from flowing plants. Flight whilst foraging is in fast low dipping undulations. Hot days see them frequently drinking water and bathing. Permanent pairing normally occurs in the first winter. Keeping close to their territories, older Silvereye pairs will permit other birds to forage in that territory. When feeding nestlings or fledglings, nesting birds will feed outside their territory. They nest in discrete pairs. Sing to advertise territory - song being very voluble. Silvereye give whispered subsongs from under foliage, throughout the day. Reference:- Reader's Digest Complete Book of Australian Birds.