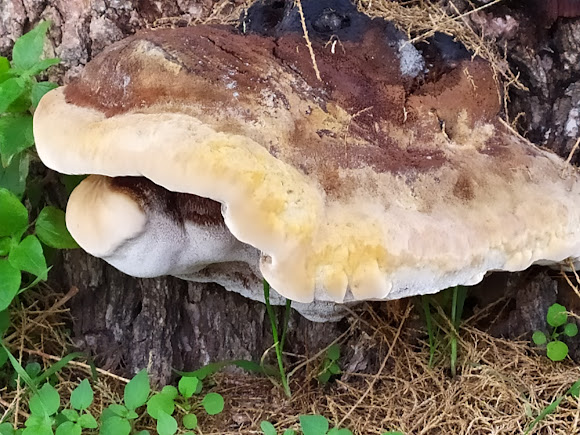 Ischnoderma resinosum is a species of fungus in the family Fomitopsidaceae. Commonly known as the late fall polypore, resinous polypore, or benzoin bracket, this shelf mushroom is 7–25 cm (3–10 in) across, velvety, dark red/brown, aging black. Its spongy but tough, sweet smelling flesh exudes a red liquid when young. This fungus fruits on hardwood logs and stumps in late autumn. A widely distributed species, it has been recorded from Africa, Asia, Europe, and North America. The species was originally described as Boletus resinosus in 1794 by German botanist Heinrich Schrader. It has acquired an extensive synonymy in its taxonomic history, having been juggled between several genera. Petter Karsten transferred it to Ischnoderma in 1879 to give it the name by which it is currently known. Young, soft specimens may be cooked and eaten, but the species becomes hard and unpalatable later in life.