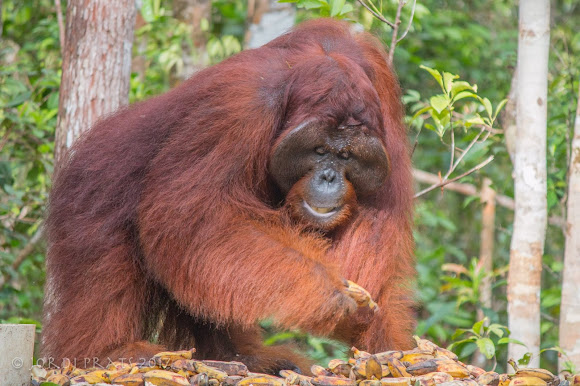 A dominant male adult with his distinctive cheek pads, males weigh on average is 75 kg, and 1.2–1.4 m long, the Bornean orangutan has a distinctive body shape with very long arms that may reach up to 1.5 metres in length. It has a coarse, shaggy, reddish coat and prehensile, grasping hands and feet, their hair is typically reddish-brown, males and females differ in size and appearance.

Spotted at Camp Leakey, Tanjung Puting National Park (Tropical forest) - Kalimantan, Borneo - Indonesia, on a feeding Orangutang platform. The rangers put some bananas in the platform and call them with a loud sound, after a while a female with an infant came from the top of the nearby trees, after them a younger joined and only when they finished eating the big male appeared from the vegetation were he was hiding and observing all the scene. The Bornean orangutan is a species of orangutan native to the island of Borneo and together with the Sumatran orangutan are the only genus of great apes native to Asia, is a critically endangered species, with deforestation, palm oil plantations and hunting posing a serious threat to its continued existence, hence several conservation and rehabilitation organisations are dedicated to the survival of orangutans in the wild. Orangutans are the most arboreal of the great apes and spend most of their time in trees and fruit is the most important component of their diet; however, the apes will also eat vegetation, bark, honey, insects and even bird eggs. Bornean orangutans live no higher than 1000m and their predators in Borneo include clouded leopards and crocodiles, the absence of tigers on Borneo may explain why Bornean orangutans can be found on the ground more often than their Sumatran relatives. The Sumatran and Bornean species are both critically endangered according to the IUCN Red List of mammals, and both are listed on Appendix I of CITES. The IUCN estimated in 2016 that around 100,000 orangutans survive in the wild.

Orangutan (also spelled orang-utan) mean "Man of the forest" in Bahasa. Orangutans are among the most intelligent primates using a variety of sophisticated tools and construct elaborate sleeping nests each night from branches and foliage they share approximately 97% of their DNA with humans. In December 2014, Argentina became the first country to recognise a non-human primate as having legal rights when it ruled that an orangutan named Sandra at the Buenos Aires Zoo must be moved to a sanctuary in Brazil in order to provide her "partial or controlled freedom". Although animal rights groups interpreted the ruling as applicable to all species in captivity, legal specialists considered the ruling only applicable to hominid apes due to their genetic similarities to humans. Kingdom: Animalia Phylum: Chordata Class: Mammalia Order: Primates Suborder: Haplorhini Family: Hominidae Genus: Pongo Species: P. pygmaeus

Congrats Jordi on your SOTD.

Thanks so much Daniele!

"Today is International Orangutan Day, and we've chose this beautiful adult male Bornean Orangutan (Pongo pygmaeus) as our Spotting of the Day. International Orangutan Day has been set for August 19th to help encourage the public to take action in preserving these highly threatened animals. Both Sumatran and Bornean species of orangutans are now listed as critically endangered by the IUCN, and both are listed on Appendix I of CITES. This orangutan was spotted at Camp Leakey in Tanjung Puting National Park in southern Borneo, a research station of the Orangutan Research and Conservation Program. Find out more about their work here: https://buff.ly/2wdcxIG "