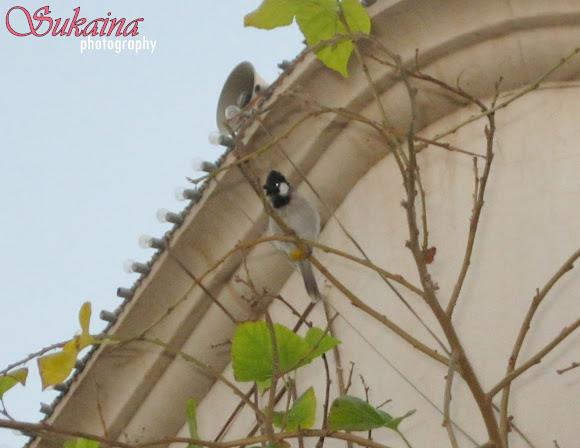 This species is very similar in appearance to the Himalayan White-cheeked Bulbul Pycnonotus leucogenys but smaller and uncrested and with a larger white cheek patch. It has a pale bare eye-ring. The vent is orange yellow. Sexes are alike. It is found in scrub forest and gardenland. Also found in flocks or pairs in the mangroves, gorging on the fruits of the Meswak bush. Usually seen in pairs or small groups. It feeds on fruits and insects, and breeds in March–June............(Wikipedia)

The White-eared Bulbul (Pycnonotus leucotis) is a member of the bulbul family. It is found in Kuwait, Bahrain, mid and southern Iraq, southern Iran, Afghanistan, Pakistan, north-western India, in parts of Maharashtra, Madhya Pradesh, and on the Arabian peninsula. The species was earlier considered a conspecific of Pycnonotus leucogenys...........(Wikipedia)