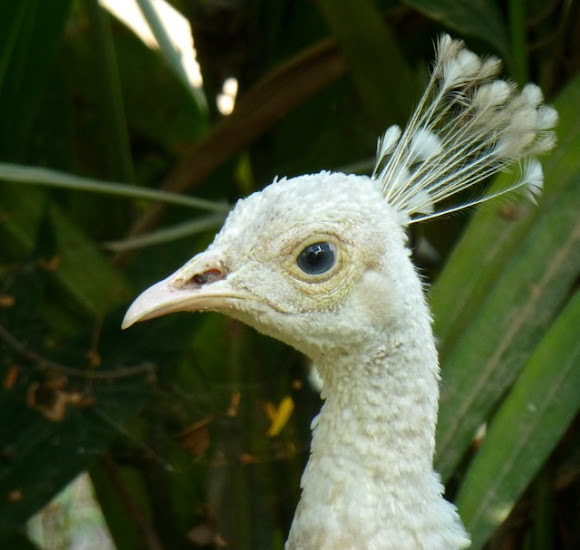 Besides the India Blue, whites are the most well known peafowl type to non-enthusiasts. Contrary to popular belief, whites are not albinos, because their eyes are blue, not pink. Type of mutation: The white is a color mutation, and although it can carry other genes, such as the blackshoulder and white-eyed, they are not visible because of its completely white color. Peacock Coloration: Males are, as their name implies, completely white. Faint eyespots can be distinguished in the train by a thin layer of off white that surrounds the ocelli. The actual seeing eyes of the birds are blue. Peahen Coloration: Hens are completely white, with blue eyes. Peachick Coloration: When first hatched, the chick is yellow in color with white wings. White chicks are hard to sex until about two years of age when the male will developed wispy tail coverts, because the bird does not change color much in its lifetime, and the male and female look so similar. Chicks born at the same time can sometimes be sexed by the length of their legs. Males often have longer legs than the females. Origin: It is speculated there may be a few white peafowl bred naturally in India. White was one of the first variations to be discovered and made popular, and has been around for many years. This white Peahen and her chick spent the morning in my garden. The chick has natural colouring and the start of green feathers can be seen on it's neck.

Would someone please confirm the scientific name for this white peahen?

thanks RGB and Yuko...

thanks Leuba. We still have water, so the garden is green and sort of cool! We are having our 2 weeks of winter now and it's HOT! Unseasonably so...

lovely! your garden ( what we can see of it) looks a lovely cool place too..