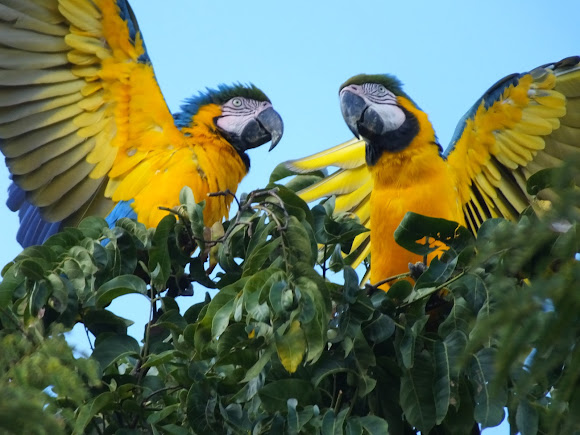 Big Blue and Yellow bird. They are vivid in appearance with blue wings and tail, dark-blue chin, golden under parts, and a green forehead. Their beaks are black. The naked face is white, turning pink in excited birds, and lined with small, black feathers.

There are lots of Blue and Yellow Macaws in Caracas. They are seen AND HEARD all over the city. Apparently they are escaped pets who reproduced in Caracas and have now settled down here. This was very lovely because in the first picture the two pictured were flapping their wings and trying to impress each other, after that display one of them left. Then another one came to the tree and was greeted full "love" and attention! They even kissed (probably mum and juvenile exchanging food?) It just proves how social these birds are and that putting them in a cage away from their kind is just not a nice idea to say the least.

Thank you AntónioGinjaGinja, and triggsturner.
I am still beaming!
I agree Jim. These should not be held in cages. if you see them talking to each other and always flying in two's, you would like them to keep doing exactly that for ever.

Gorgeous birds, Muckpuk! It is great to see them in the wild, not in a cage.

Congratulations on your SOTD Muckpuk.

Beautiful series Muckpuk,congrats on the well deserved SOTD and thanks for sharing

Thank you VERY much DanielePralong!
I am very honoured!
It was a perfect day that day with so many gorgeous creatures around!
:-)

Congratulations Muckpuk, these splendid Blue and Yellow Macaws are our Spotting of the Day!

Thank you Neil Ross
I have been waiting for an opportunity for me, my camera and the Guacamayas to be in one place.
I just adore them.

Lovely spotting. These are beautiful birds. Great series and info too, and the soft light on the underside of the wing in the third photo is quite spectacular.