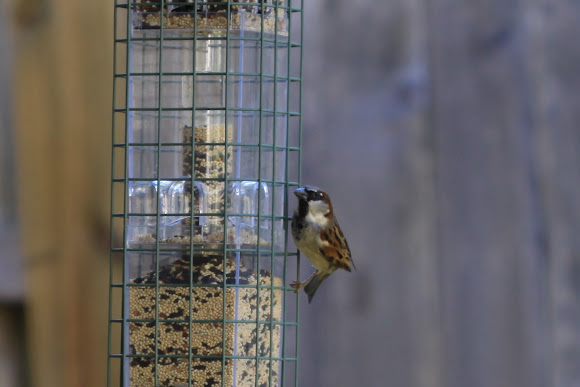 Generally, sparrows are small, plump, brown-grey birds with short tails and stubby, powerful beaks. The differences between sparrow species can be subtle. Members of this family range in size from the Chestnut Sparrow (Passer eminibey), at 11.4 centimetres (4.5 in) and 13.4 grams (0.47 oz), to the Parrot-billed Sparrow (Passer gongonensis), at 18 centimetres (7.1 in) and 42 grams (1.5 oz). Sparrows are physically similar to other seed-eating birds, such as finches, but have a vestigial dorsal outer primary feather and an extra bone in the tongue. This bone, the preglossale, helps stiffen the tongue when holding seeds. Other adaptations towards eating seeds are specialised bills and elongated and specialised alimentary canals. (Wikipedia)

(Wiki) The sparrows are indigenous to Europe, Africa and Asia. In the Americas, Australia, and other parts of the world, settlers imported some species which quickly naturalised, particularly in urban and degraded areas. House Sparrows, for example, are now found throughout North America, in every state of Australia except Western Australia, and over much of the heavily populated parts of South America. The sparrows are generally birds of open habitats, including grasslands, deserts, and scrubland. The snowfinches and ground-sparrows are all species of high latitudes. A few species, like the Eurasian Tree Sparrow, inhabit open woodland.[4] The aberrant Cinnamon Ibon has the most unusual habitat of the family, inhabiting the canopy of cloud forest in the Philippines. They are primarily seed-eaters, though they also consume small insects. Some species scavenge for food around cities and, like gulls or Rock Doves, will happily eat virtually anything in small quantities.