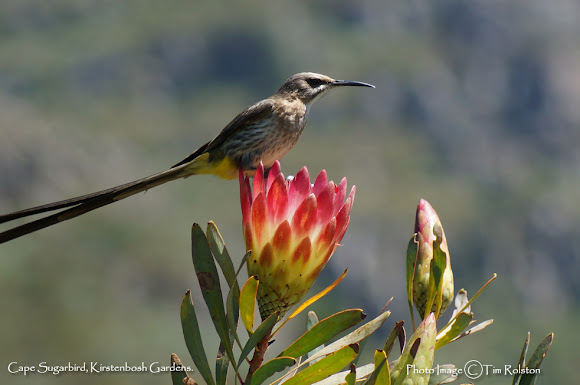 The Cape Sugarbird is a grey-brown bird that easily recognisable by a spot of yellow under its tail and the very long tail feathers present in males. The male is 34–44 cm long, and the shorter-tailed, shorter-billed, and paler breasted female 25–29 cm long. Another characteristic of the Cape Sugarbird is the sound it makes when it flies. The main flight feathers are arranged in such a way that when the bird beats its wings, a frrt-frrt sound is made with the intention of attracting females

The Cape Sugarbird is distributed throughout the chaparral in South Africa and the Cape Floral Region where there are flowering proteas and ericas. It is also found in gardens in summer when most proteas are not in flower.[3] A common species throughout its range, the Cape Sugarbird is evaluated as Least Concern on the IUCN Red List of Threatened Species.[1]

The Cape Sugarbird has an intimate relationship with the sugarbush proteas being near solely responsible for pollenation of the plants through its activities of collecting nectar.

Thank you all for the comments, alas I post when I can, when I think that something is worthwhile. When a creature particularly interests me or is especially beautiful. I post when my heart tells me too, but I have to admit that I am not as dedicated as some.

Wow!
U should put it on the mission: Birds of the World!