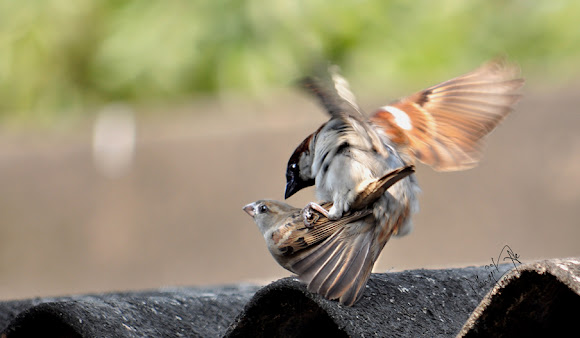 Common House Sparrows with which I had grown up in our 300 year old home in Kolkata City, West Bengal, India.

The House Sparrow (Passer domesticus) is a bird of the sparrow family Passeridae, found in most parts of the world. A small bird, it has a typical length of 16 cm (6.3 in) and a weight of 24–39.5 g (0.85–1.39 oz). Females and young birds are coloured pale brown and grey, and males have brighter black, white, and brown markings. The House Sparrow is strongly associated with human habitations, and can live in urban or rural settings. Though found in widely varied habitats and climates, it typically avoids extensive woodlands, grasslands, and deserts away from human development. It feeds mostly on the seeds of grains and weeds, but it is an opportunistic eater and commonly eats insects and many other foods. Its predators include domestic cats, hawks, owls, and many other predatory birds and mammals.

Observing the Sparrows is a good exercise for the BirdWatchers and the BirdLovers alike. We can learn about their survival techniques in the Urban Space. Recent reports would proclaim that the dwindling number of the Sparrows is due to Mobile Communication systems and other new Technological Advancements. But as I have observed in old cities like Kolkata(Calcutta), my home city....the Sparrows are no longer getting cozy nooks and corners to nest, since rapid Urbanization is resulting in the demolition of the Old Architectural heritage in major cities in India.

Wonderful photo and that's an interesting observation in your notes section about nesting spaces dwindling in modern cities. Thanks.

again, a great action shot ! - the black of the male sparrow adds to the drama - very nice ..

they do that a lot